Shame on You, ComEd 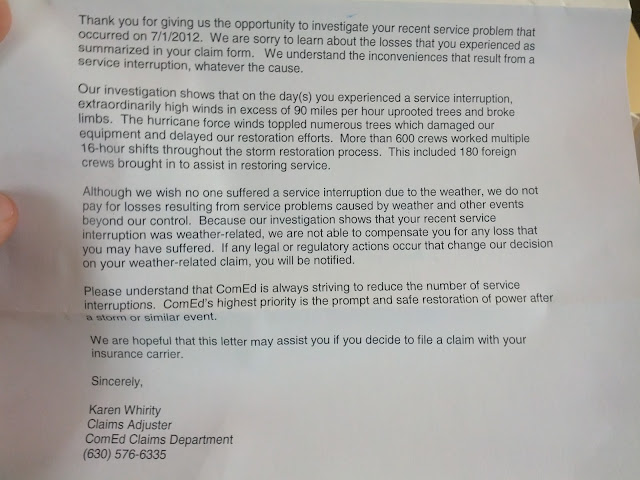 Like the rest of Elmhurst, we suffered a power outage from a massive storm that lasted multiple days starting on July 1, 2012.  The entire contents of our fridge were spoiled.  ComEd has a form that they 'tout' in the press and with elected officials that residents can fill out to try to get reimbursed for some of their food spoilage.  In fact, the form, found here, specifically says:


A customer may have a claim for actual damages and a unit of local government may have a claim for reimbursement for emergency and contingency expenses under Section 16-125(e) in the event that more than 30,000 customers are subjected to a continuous power interruption of four hours or more that results in the transmission of power at less than 50% of the standard voltage, or that results in the total loss of power transmission.


So, I dutifully filled out the form, included a receipt and itemized *some* of the items we lost in our fridge.  The total was just under $115.

Today, in the mail, I received this letter from Karen Whirity a Claims Adjuster with ComEd which says that after investigating my service problems, they're NOT going to pay my claim.  You can see the note above that they say that they do NOT pay for losses resulting from "service problems caused by weather and other events beyond their control."

So...when, exactly do they pay?  I'm guessing never.  I'm guessing that this spoilage form is a ruse.  A clever ruse by a bunch of folks who want to play the public relations game of saying their standing by their customers all the while peddling influence in Springfield at the Capitol to get their rates raised.

I can hear it now:


ComEd PR Team member:  "Hey...you know how we always get complaints and have a bad reputation whenever power goes out in Suburban Chicago?  What if we put out a press release and posted a 'spoilage form' where customers can submit their list of spoiled food and what it cost?"

ComEd PR Team member:  "That's the beauty, boss!  The whole thing is a ruse.  We're never going to *actually* reimburse them.  But, we can use the form as something to point out whenever we're in crisis mode or when we're trying to get a legislator to vote for one of our rake hikes."


So...I have to wonder:  Why even have the form, ComEd?  If you're NOT going to pay a claim when more than 100,000 customers were without power, when are you going to pay?

I think we all know the answer to that question:  Never.