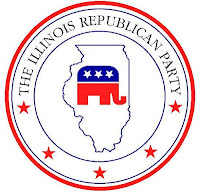 The Chicago Sun-Times called it a “bloodbath”. The Chicago Tribune described the Illinois Republican Party as being in a “gloom”. Whatever you call it, if you are a Republican in Illinois you can’t be pleased with the outcomes of the 2012 election. Worse, without action, the trend will only get worse and Republicans will soon become an extinct species in Illinois.

In a post-mortem piece in Crain's, a GOP operative said:


"The Republican party has to take a hard look at who are the new people who turned out in this election, and who else is out there? If we don't, this will become Massachusetts for a generation." Christine Dudley, a GOP consultant and former executive director of the state party in its mid-1990s heyday, said the real problem is that "our party is driven by 25- to 40-year-old men sitting at a computer and looking at data who are driven to win, (but have) no real knowledge of the real world."

Really?  We should dump a data-driven approach?  Just go with our hunches?  Really?

If that's the future of the Illinois Republican Party, then you'll likely have to count me out.  I want to be a party that isn't afraid of science or research or data.  Instead of ignoring the polling data and trends, we should go further to embrace and capture *as much* data as we can as a party.

Either we can spend the next several months -- or years -- trying to figure out what how this all happened, laying blame for the accumulated losses at Conservatives or Moderates, blaming Speaker Mike Madigan, “the map” or even President Obama, or we can begin our work today of building the new ILGOP.

And the number one priority needs to be a massive investment in digital organizing.   That's the only way we win in 2014.