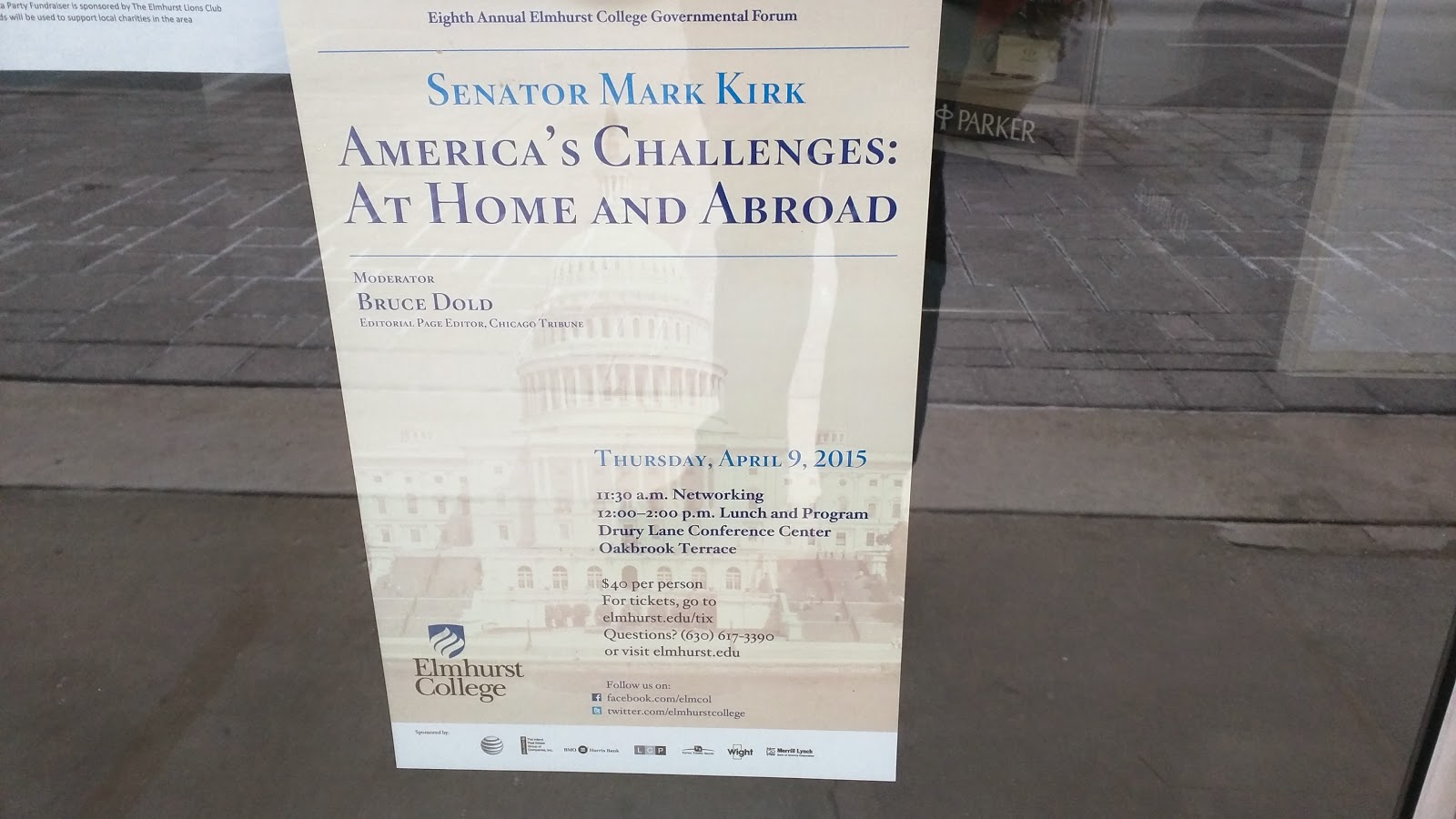 Elmhurst College - here in Elmhurst - have posted their latest posters around town inviting the public to a session as part of their "Government Forum" series featuring Senator Mark Kirk entitled:  America's Challenges: At Home and Abroad.  It is going to be moderated by the Chicago Tribune's Bruce Dold.   I took this photo of the poster in one of the storefronts in the City Centre.

I posted another of these back in 2013 that featured (now Governor) Bruce Rauner coming to Elmhurst College here.

The series is the creation of former Illinois House Speaker/Minority Leader Lee Daniels.  Daniels started the "Government Forum" at the College.

Senator Kirk's session, however isn't taking place at the college.  Instead, they've moved it to Drury Lane.  Guessing they're expecting a much bigger crowd?  Also...the Rauner event was 'free' where-as this Kirk event costs $40 and includes lunch.  From the Elmhurst College site:


The Elmhurst College Governmental Forum brings together the state’s foremost governmental and civic leaders, business experts and policy analysts to discuss the most important economic and governance issues facing our state and our nation. In previous years, the Governmental Forum has welcomed former Illinois governors James Thompson and Jim Edgar, Speaker of the Illinois House of Representatives Michael J. Madigan and Business Roundtable President John Engler, among many others.

The 2015 Forum, titled America’s Challenges: At Home and Abroad, will take place at the Drury Lane Conference Center in Oakbrook Terrace on Thursday, April 9, at 11:30 a.m. Tickets are $40 and include lunch.

This year’s featured speaker is U.S. Senator Mark Kirk, who has been the Republican senator from Illinois since 2010 and who serves on the committees for appropriations, banking, HELP (Health, Education, Labor & Pensions) and Aging. Senator Kirk also is the ranking Republican on the Appropriations Subcommittee for Military Construction and Veterans Affairs.