A couple of days ago, I shared my excitement and a few photos of a yard sale find that I picked up in Southwest Michigan:  a Republican Congressional Cookbook "from your Congressman Gerald R. Ford" - who you know went on to both become Vice President and then President.  Despite never being elected to either of those offices.  I didn't read all of the recipes (just yet), but I did find this other page that I thought was worth sharing on the inside back cover.  In this cookbook, (then) Congressman Gerald R. Ford shared what he called "A Declaration of REPUBLICAN Principle and Policy". Have a read of what he has to say as he lays out the "Basic Beliefs Of Republicans": 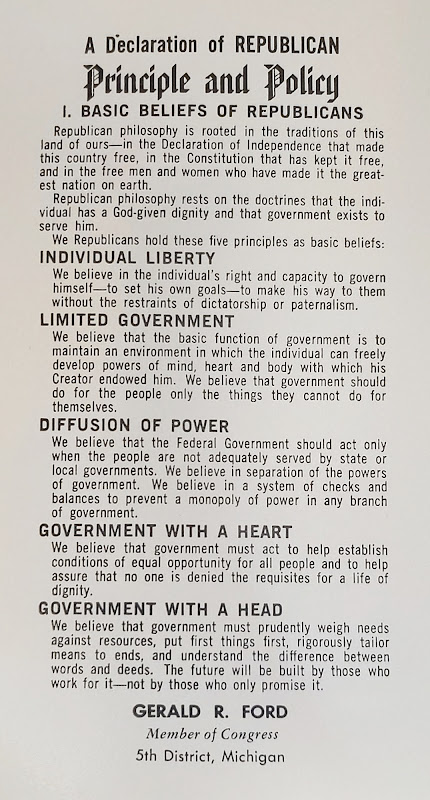 I've retyped the copy of that photo below.  It reads:

Republican philosophy is rooted in the traditions of this land of ours -- in the Declaration of Independence that made this country free, in the Constitution that has kept if free, and in the free men and women who have made it the greatest nation on earth.

Republican philosophy rests on the doctrines that the individual has a God-given dignity and that government exists to serve him.

We Republicans hold these five principles as basic beliefs:

INDIVIDUAL LIBERTY
We believe in the individual's right and capacity to govern himself - to set his own goals - to make his way to them without the restraints of dictatorship or paternalism.

LIMITED GOVERNMENT
We believe that the basic function of government is to maintain an environment in which the individual can freely develop powers of mind, heart and body with which his Creator endowed him.  We believe that government should do for the people only the things they cannot do for themselves.

GOVERNMENT WITH A HEART
We believe that  government must act to help establish conditions of equal opportunity for all people and to help assure that no one is denied the requisites for a life of dignity.
GOVERNMENT WITH A HEAD
We believe that government must prudently weigh needs against resources, put first things first, rigorously tailor means to ends, and understand the difference between words and deeds.  The future will be built by those who work for it - not by those who only promise it.
I've read that like ten times and I can't help but wonder where that Grand Old Party has gone.  I mean, it seems that the party - my former party - has hewn way too far away from these five principles.  Individual Liberty means keeping the government out of our lives.  Limited Government means (to me) that the government's job needs to have boundaries.  Diffusion of power?  I mean...have you read what the current President has said about the 'peaceful transfer of power'?
And, it seems most relevant for today's world:  Government with a heart.  It talks about 'all people'.  And, of course, Government with a head.  That's just called being sensible and having our government function like any business or family does:  live within their means.
So, how different is this than the current Republican Party platform? Oh, that's right.  There isn't one.
Take a look at the 1976 Republican Platform - when Gerald Ford actually ran (and lost) a Presidential campaign.  I've posted a screenshot of some of the preamble below. It speaks to: 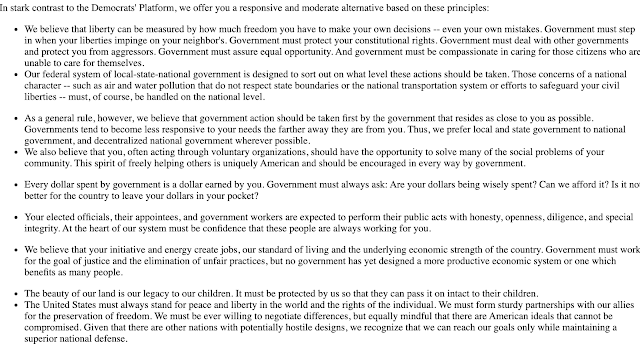 Here's my shorthand of what is posted above:
Last presidential election, I voted for the first time for the democrat candidate.  This year - we'll be voting by mail this week.
centrist donald trump future of the republican party Gerald Ford Grand old Party President Ford presidential politics Republicans