Showing posts from November, 2004
Show all 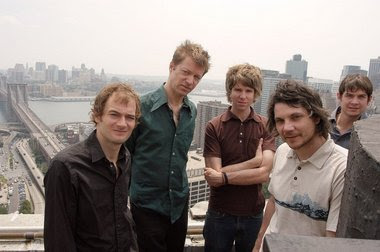 Are the critics heaping too much praise on Wilco? That's  Kevin 's  argument. Wilco has gone from a small band with a cultish following to a heavily hyped, critically loved behemoth. And rock critics are heaping praise -- a little more than is warranted -- on the band's latest album, A Ghost Is Born. They laud its mix of understatement and obstinacy, even while couching those accolades with qualifiers. Rolling Stone makes unsurprising comparisons to canonical figures such as Neil Young and the Band; it also calls Ghost "eerie." Spin labels it both "engagingly complex" and "willfully obscure"; The New York Times declares it "stunning" and "an evasive maneuver, intended to frustrate listeners." ...The media latched onto the story, and who could blame them? The David-and-Goliath angle made for great drama -- especially when, upon its release in 2002, Foxtrot became the band's most commercially successful album t
Post a Comment
Read more

Posted by Jake Parrillo on November 30, 2004
Patrick Daley, Mayor Daley's boy, is set to ship out for the Army after the first of the year. God Speed, Patrick.
Post a Comment
Read more

We may know something about that.

Posted by Jake Parrillo on November 30, 2004
The LA TIMES ponders what's hip and why? I think that we may know a thing or two about being hip...at least according to Carol Marin : Cross knows a lot about Metros and Retros. His district out in suburban Plainfield has plenty of both.  His staff includes some very young, hip guys who know the Internet like the back of their hand . They, too, like Topinka, are recruiting a farm team, but by borrowing a page from the book of one-time presidential hopeful Howard Dean. Go to JOINCROSS.com and you'll see what I mean. There, you can play the ''Take Back Illinois'' video game, a four-week contest moving electronic little people around a screen addressing issues like medical malpractice and education. The ultimate goal, of course, is to retake the Illinois House and Senate from the Democrats who now control it. Wait until the Holiday party invites go out to the office--then we're really going to show our 'hip chops'. I think that some of the weine
Post a Comment
Read more
More posts