Showing posts from May, 2007
Show all

You Can Help: Yellowstone Buffalo Headed to the Slaughterhouse

Posted by Jake Parrillo on May 30, 2007
If you're looking for something to spend a few minutes of your online advocacy time on, this seems to be a pretty good cause . Give them a hand by sending 3 simple emails. Montanaâ€™s Department of Livestock is planning on trapping and slaughtering 300 wild buffalo â€“ including calves as young as a few weeks, and their mothers. The agency plans to begin the roundup on Thursday, May 31. For extra credit, make sure that you tell Governor Schweitzer that he "could" be the Vice Presidential Nominee in 2008, but this won't help him. Seems that the emails have already helped stall this terrible thing. They've put off the vote until next week. With your help, they'll reconsider.
2 comments
Read more

Friday Finds: A Punchup at a Wedding

Posted by Jake Parrillo on May 25, 2007
Did you come just to start a fight? A Punchup at a Wedding Radiohead Hail to the Thief
Post a Comment
Read more

Over on our wedding blog , we're trying to gauge people's honest opinions on these "buttons" for our rehearsal dinner. I think they're cute and a good way to get folks talking to each other. We'll probably have a pretty big sized rehearsal dinner, so we don't want people to not socialize. It's one of many posts that Natalie and I have collaborated on. Natalie is clearly the more clever, quick one of us. She wrote the punchline, which I think is pretty funny: Buttons that have been rejected from the list include: "I slept with the grooms's mom," "I used to be the bride's sister, but now I'm her brother," "I'm just here for the booze," "I got a pity invite" and "I love lamp." Go on. Head over to the wedding blog and give us your vote. I'm hoping that we'll get these done. We probably won't do buttons as much as we'll probably just do nametags run through a printer.
Post a Comment
Read more

Here's a few XRT widgets that I fooled around with to show the XRT guys what they can be doing to help get their content disributed: Get great free widgets at Widgetbox ! Get this widget! ↑ Grab this Headline Animator
Post a Comment
Read more

We've been having a lot of fun over on our wedding blog . Natalie and I have been posting a lot. It's not the most compelling stuff for general consumption, but it's a nice way for us to keep in touch with our families, friends, and members of the Wedding Party. We're able to connect with the folks who will make our Big Day special, but it also allows us to share our experiences with everyone involved. We're trying to do things like polling the audience on how much they'd pay for a hotel as well as sharing our notes from our experience with our vendors . Natalie has been good about giving me a lot of latitude on what I post and what I do with the blog. As we come closer, I'm sure the design/content will come under closer scrutiny. ( Some folks were wondering how I slipped the Major League quote by her. Other's were just puzzled as to why I would slip it in there in the first place! ) Most importantly for me is that the wedding blog provides me
1 comment
Read more 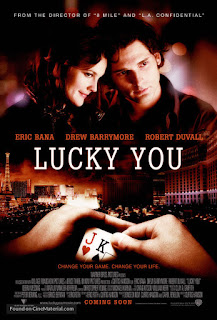 This morning on the drive into the city, Natalie and I were tuned into WXRT (as usual) and we listened to the movie review by the "Regular Guy". This week, he covered the movie Lucky You , which he said had a stellar cast, but was a below average film. They don't have it posted here on the XRT site yet, but it'll get up there eventually, I bet. His review was fun, as usual, but one thing stuck out for me: he said that there's a new Bob Dylan song in the movie. Turns out Lucky You is directed by Curtis Hanson, the same guy who directed Wonder boys . Hanson must have the "magic touch" because just like he did with the great song Things have Changed , he somehow coaxed Dylan to put out a new track for Lucky You . The new song, Huck's Tune is a great number and a nice addition to the "latest" Dylan work. From what the Regular Guy said this morning, the song only plays over the ending credits in the movie, so I'm sure it's
Post a Comment
Read more

Somehow this week (stamp machine, I think), I came into a few of the sacagawea dollar coins . They've been jangling around my pockets for a few days and today, I decided to spend them. At the sammich shop down the block from my office, I ordered my meal, stepped over to the cashier, and gingerly handed the coins over to the young lady. She didn't even flinch. Gave me a few coins in change and I went on my way. I couldn't help but feel like I just had gotten away with something - like I got a big discount. Anyone use these things regularly? Did they stop minting them? Should I not be spending them, instead keeping them or something?
1 comment
Read more

Letter From Senator Lauzen Re: SB600 and Doug Ibendahl

Last night when I arrived back from work, I had, waiting for me, a letter from State Senator Chris Lauzen. He apparently, is a reader of this blog. Hello, Senator! Thanks for your cordial letter. I appreciate your interest in my blog. In his correspondence, Senator Lauzen takes issue with my position on Senate Bill 600 and this post . It was nice of him to take time out of his legislative duties to correspond with me and I thank him for that. I won't go blow-by-blog through his letter, but I'll point out a few things. Senator Lauzen states: "I was surprised at the intensity of your sarcasm in pointing out how inaccurate your claim Doug Ibendahl's account was regarding the history of this legislation." Surprised at my sarcasm? I guess you're not a subscriber, eh Senator?!? I hope that you subscribe to my feed via your reader or email. It's over there on the right. You'll get all my posts delivered to you! Next, he includes roll call votes
Post a Comment
Read more
More posts