Showing posts from February, 2005
Show all

Posted by Jake Parrillo on February 04, 2005
It's coming pretty fast.  I just burned AGIB for one of my mates who is heading to the show on Tuesday with us. He has YHF, but didn't get 'Ghost' because it's not 'out on vinyl' yet. The good news about that is that it's coming March 8th with 'new cover (not the infamous egg)'. In other Wilco-related news, ' Golden Smog ' is set to record a new record . Attention all drummers: Golden Smog is getting ready to make another album.  Actually, former ZuZu's Petals drummer Linda Pitmon -- who filled the Smog's ever-rotating drum slot at October's Rock for Karl show -- will likely play on the new CD alongside the usual suspects: Jeff Tweedy (Wilco), Dan Murphy (Soul Asylum) and Jayhawks past and present Gary Louris, Marc Perlman and Kraig Johnson.  Manager Jake Walesch, who is Soul Asylum's point man, says the Smog plans to record in Spain in March. The fact that the gang is going overseas to make the album suggests
Post a Comment
Read more

Posted by Jake Parrillo on February 03, 2005
For what it's worth...this is the 3rd straight day that I haven't been **asked** to take anything down from the blog or **modify** anything either. That's got to be some kinda record. I love these session days. The 'bigs' have better stuff to do than surf over here to check up on me...either that....or....my stuff has just been really bland. Not sure. On most days if you get over here by like 8:30ish you can see all the 'entries' in their 'unedited' state. By like 9 or 9:30 someones figured out that we shouldn't be 'saying that' on the Tom Cross Blog. Ever see 'Fight Club' ? Who knows? Maybe I'll start inserting a bit of somethin' every once in a while. Gotta keep the 'bigs' on their toes! **UPDATE** 10:19 a.m. The streak is over.  Sadly.  Or not.
Post a Comment
Read more 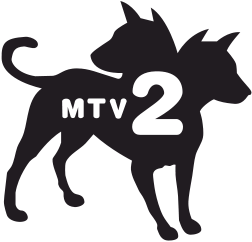 MTV2 apparently has a new logo . Not to sure what to think.... What on Earth is the two-headed dog?  It's the new logo for MTV2 and the creature behind MTV's viral-marketing campaign to create all-important buzz for MTV2's new look and programming. Yesterday, MTV plastered its headquarters in Times Square with the two-headed dog profile.  And for the past three weeks at New York's coolest concerts, rock-loving hipsters have been bombarded with T-shirts, hats and hoodies emblazoned with the silhouette of a two-headed dog. Hmmm....they're going to preview the 'new' MTV2 at halftime of the Superbowl on Sunday. (check out the site...it's pretty crazy) I don't get MTV2, I don't think...but I did just get my tv all set up. My dad came over and assembled the stand and helped me lift the thing up onto it. Some rearranging of furniture happened too. I'll post some pics later tonight. Needless to say...my record collection does not hav
Post a Comment
Read more

Too Much Bright Eyes?

Posted by Jake Parrillo on February 02, 2005
I know...I know...Bright Eyes is all over the place today....I'm not totally digging it yet, but this show  helped push me into Connor's camp. It's a webcast from 'All things Considered'. Give him a try...you might like him. Besides...he's Winona Ryder's latest indie-rocker boyfriend . (Hat Tip, Whitney Mateson via my sister Vic)
Post a Comment
Read more

Posted by Jake Parrillo on February 02, 2005
Lance...Are you gearing up for the Super Bowl? Is Mrs. Stevens going to be putting out a  spread ?  "It's the day the whole nation goes into a frat mentality. It's a day devoted to gluttony, a day devoted to eating the worst foods possible under the guise it's an American tradition. After a long day knocking on doors out in Aurora, I could use some chowder.
Post a Comment
Read more

Still Not Sure About Blogs and Their Effectiveness?

Posted by Jake Parrillo on February 02, 2005
Steve posts about the journalist's 'dirty little secret' : With the pro journos actively swimming around the blogosphere waters like sharks in search of dinner, there's absolutely no excuse not to at least monitor what people are writing on blogs. **Waving hello at StateHouse Reporters**
Post a Comment
Read more
More posts