Showing posts from 2008
Show all 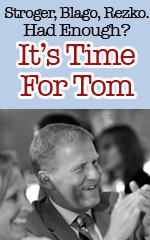 As I pointed out earlier in the week , Illinois Republicans are at a crossroads. We need to find a strong leader to provide the framework upon which we can reset the Republican Party as well as the State of Illinois. I know I'm not the only one that's frustrated with our State. Governor Rod Blagojevich is corrupt, Todd Stroger is inept and the rest of the Chicago Machine is trying to install their children into office against the wishes of everyday voters. The budget is broken. People are loosing their jobs. Nothing is getting fixed. The state is teetering on collapsing. We need a clean break with the past. We need to reform the way government works in Illinois. We need new leaders. I'm convinced that Illinois needs Tom Cross. Right here. Right now. Check out the new site here . I know Tom from seeing him work on issues that he's passionate about. From lower taxes to smaller government to ensuring that our morning commutes are as painfree as can be, Tom h
3 comments
Read more

Illinois Republicans: Where Do We Go From Here?

Posted by Jake Parrillo on November 05, 2008
My fellow Illinois Republicans, Last night, we - as a party - lost 3 seats in the Illinois House, 2 Congressional seats (Hastert, Weller), did not really compete for a US Senate Seat, lost and failed to hold plenty of county-level offices, and now we have a Chicago Democrat in the White House (We wish him well!). This is what's known as rock-bottom. That's a lot of damage to our party- and a lot of votes for "change". Seems to be clear that the Illinois Republican Party need some change of our own. And fast. Right around the corner, we have an election in 2010 that will feature Blagojevich and Crew in the Statewide offices, Todd Stroger up for re-election as the Cook County Board President, 3 Congressional seats we should be competing in, and a slew of Illinois House and Senate seats at play. In order to be in a position to even compete for those races, Illinois Republicans have a lot of preparation ahead of us. We need to make a hard reset of the party. The D
8 comments
Read more 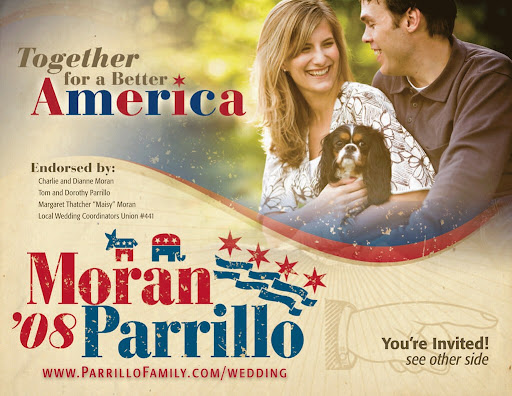 Just 11 days away until I'm a married man. With the longest engagement on record (21 months!) winding down, I thought it'd be appropriate for me to share with you all (Ahem...is there anyone still there?) one of my favorite parts of this whole wedding planning business. Sure...we had all the showers, thank you cards, chicken dinner tastings, table cloth selections, ring shopping trips, and discussions of the various shades of pinks (It's not my color!). That was all good and important stuff. However, the part of this whole experience that Natalie let me run wild with and really leave my mark on was the rehearsal dinner. It's coming up in a bit over a week, and while I'm excited about the wedding, I'm really looking forward to the rehearsal dinner. From the location (Southport Lanes!) to the menu (Italian Beef Sandwiches!) to the invite list (skewed toward my friends/family!), Natalie gave me a lot of room to run. The most interesting/challenging part was t
3 comments
Read more

Great Condo in Frankfort, Illinois (at a Really Great Price, too!)

Posted by Jake Parrillo on May 19, 2008
It has come to this. With all the changes that have happened over the course of the past year (new job, new school , leaving public office ) and the biggest one coming up later this summer ( marriage ), there is one more thing that I'm looking to change: my location. I've lived in the most incredible condo in Frankfort, Illinois for the past (almost) four years. I bought it pre-construction and was lucky enough to pick out all of the finishes. The time has come to move on and I'm parting ways with my home. It was my first, but won't be my last. We've priced it incredibly (considerably below what others have sold for!) and this place is really looking for someone to love it as much as I did. There are NO better condo's in all of the southwest suburbs. I can guarantee that! (Seriously!) The details can be found here on the realtor's site . For a condo, it really has an incredible kitchen and is a great place to host a party. It's walkable to do
2 comments
Read more

The Times They Are A-Changin’

Posted by Jake Parrillo on February 10, 2008
This week, I announced that I was resigning from the Frankfort Village Board . It was an extraordinary tough decision - one which I grappled with for some time. Work, School, a huge life change - marriage - is a lot to handle. Something had to give. Unfortunately, at this point, it was public service. A more in-depth discussion of why I'm leaving is here . I've invested a lot of time and energy in to Frankfort and I'm proud of what we've been able to accomplish these past 5 years. As I wrote in my letter to the Mayor: It is with a heavy heart and much emotion that I submit my resignation from the Frankfort Village Board of Trustees effective Friday, April 4, 2008. Our countryâ€™s democracy was founded on the premise of â€œcitizen democracyâ€ and service. Leaders were elected, worked for their constituents and when their time was up, they went home. Increasingly today, weâ€™ve moved away from that model to one of career politicians. I admire our Founding Fat
4 comments
Read more
More posts