Great Moments In History (But Just The American Parts!) 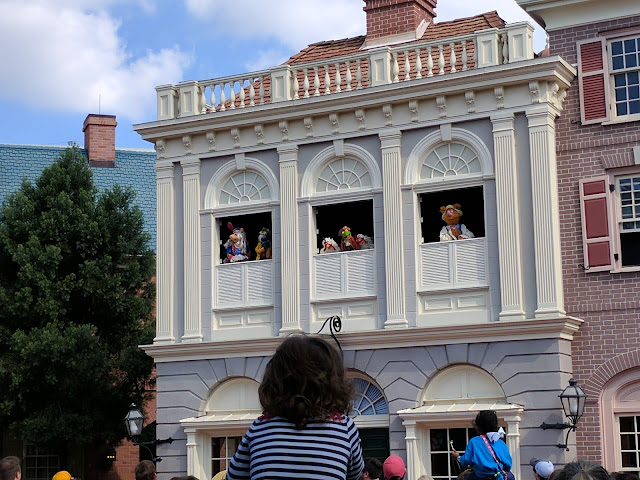 That right there is Fozzie Bear, Kermit the Frog, Miss Piggie and Gonzo the Great (along with his chickens) in the windows above Liberty Square in Walt Disney World preforming what they call "Great Moments in History....but only the American ones!".  What you don't see is Sam Eagle, who sits in his own window (hole) in an adjacent building.

We stopped and watched the show a few times and we heard two different stories:  the Declaration of Independence and Paul Revere's ride.  They were really cute and the Muppets are a PERFECT addition to Liberty Square.  We've always just used Liberty Square as a kind of 'pass through' area of the Magic Kingdom.  Sure, we'd eat up their waffles and stop at the Christmas shop, but it was mostly a way to get to the Haunted Mansion or to the Hub.  Now, there's a reason to hang there.

I've stopped taking any sort of videos from Disney World because there are pros out there that get *much* better video than I ever could!  Here's one example.  Spend 10 minutes checking out the show and just try (I dare you) to not fall in love.  Great moments in history...and this one features Moi!


From the Disney site:


Gather ‘round outside The Hall of Presidents as Kermit the Frog, Miss Piggy, Fozzie Bear, The Great Gonzo and James Jefferson, town crier of Liberty Square, bring America’s most hallowed stories to life as only they can—with an original song and plenty of Muppet mayhem thrown in.

From the midnight ride of Paul Revere to the signing of the Declaration of Independence, these hilarious reenactments of our nation’s founding have fierce patriot Sam Eagle seeing red, white and blue.