The Peonies Are Back

Posted by Jake Parrillo on April 12, 2010
If you know Nat, I don't have to tell you about what she thinks of peonies.

In late 2008, right after we closed on our house, we planted a peony plant that we received from Nat's aunt - which I believe was split from a plant she received from another relative.  Last year, we bought a few other peony plants including a transplant of a big peony plant from my sister's yard in Hinsdale - but the original plant from Nat's Aunt was clearly the prized possession in the yard.

Last summer, the plants bloomed, but were NOT spectacular.  And...if you garden at all, you know that peonies can really be spectacular.  We hosted my niece and nephew last summer for a few months and they gave our backyard a workout - including trampling all over most of everything I've planted.  I bought a few small tomato cages to put the plants in, but that just slowed the kids down, it didn't keep them away from them.

Fast forward to this Spring and as some of our bulbs started to emerge from the mulch, our peony plants laid dormant.  I told Nat that it didn't look good for them to come back.  Both of us were pretty bummed out - especially when we looked at our neighbors peony buds popping out and knowing that our's weren't keeping pace.

Then late last week, I went checking on them and noticed that they had begun to spring up.  And not just one plant.  All of them were back - most notably the plant we were given from Nat's Aunt shown below. 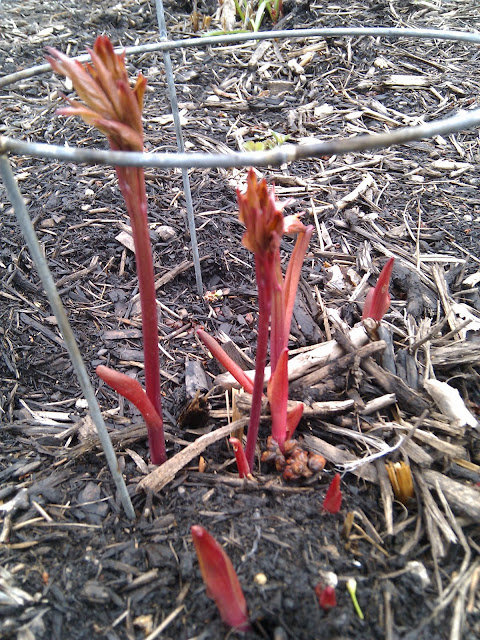 The lady we bought the house from wasn't the nicest person on earth, but she kept good soil in her beds, it turns out.
daily gardening house yard