Posted by Jake Parrillo on January 03, 2011
Just like last year, I'm going to document my Favorite (Holiday) Things.  But...I'm not Oprah, so don't look under your chairs - all of you readers won't be getting these these things from me!  Here they are, in no particular order.

1.  Bass Pro Shop and their free photos with Santa.  We went to Marshall Fields on State Street and had the Babe sit with Santa.  And they proceeded to get us for $20 for the photo.  However, when we were in Bolingbrook, I took the Babe to see Santa at Bass Pro.  And sure, they *tried* to upsell me on photo key chains and such, if you say "no thanks", they let you out of there with a nice photo for free!

2.  Our new blowmold Santa, sleigh and reindeer.  I picked him up this year after eyeing the pair for a few years.  The plan is to add a reindeer each year and eventually get a full set just like Clark W. Griswold.   Just waiting for the prices to drop! 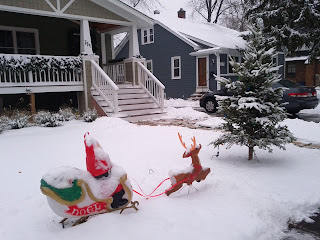 3.  Christmas Villages.  This one was easy and should be no surprise to anyone!  After lying dormant for a few years, our Village (I'm working on a name for the town!) exploded with new growth.  Four new structures went up and some new people moved in.  There's plenty of vacant land up on the new mantle, so expect to see growth when the 2011 holiday-time census report comes out.

4.  Tammen Tree Farm.  One of two second-time nominees on the list, the Tammen family put out the red carpet the weekend after Thanksgiving and welcome a few thousand of their closest friends onto their land to cut down their Christmas trees.  This was my sixth year heading to the farm and his year we paid $50 for the tree plus $7 for the shake & bale.

5.  Having a project  for the Holidays (Topper Hockey, Cutting Boards).  This year, I was working on two projects leading up to the holidays. Both Topper Hockey Boards and end-grain cutting boards were being built right up to the 24th and I enjoyed having the projects to keep myself busy.  I'm already thinking of what I can begin to work on for 2011 Christmas.

6.  Menards.  Much like the American Airlines music that they play after you board which makes me feel like I'm going on vacation, the Menards Christmas jingle just *makes* me feel Christmas.  I love walking through the converted patio furniture area that they've temporarily named the "Enchanged Forest".  Having those Christmas Village sets is a new, added bonus!

7.  Chrome OS and the CR-48.  I've been using the ChromeOS CR-48 Pilot Program laptop for the past few weeks.  While there are certainly some issues (the trackpad is, ah, bad) I can see the future and it is all about speed, security, and over-the-air updates.  Oh...and it comes in a really cool box courtesy of the geniuses at Google's Creative Lab. 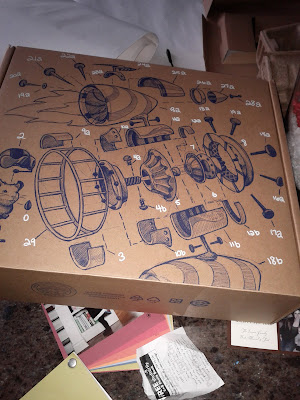 8.  Trader Joe's Advent Calendars.  They're dirt cheap (< $5.00) , the chocolates aren't that great, but they sure come in handy when there's more than one "opener" involved.  With our nieces and nephews angling for the bigger calendar, the TJ's version was there for the rescue and a back-up chocolate. 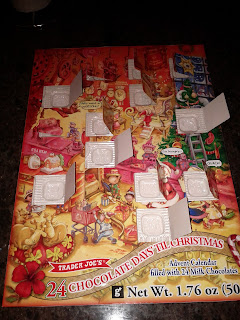 9.  Crate and Barrel Star-shaped Christmas Tree Cookie Cutter.  This is a set of concentric star cookie cutters that -when used - creates a set of star-shaped cookies.  Stacking these cookies on top of each other creates a tree.  Nat made the cookies and I helped stack them up.  She (fortunately) made two sets.  The first tree didn't fare so well, but once we learned how to work with the icing, the second one firmed up and looked great.

10.  Norad Santa on your phone.  This is the other 2-time nominee on the MF(H)L.  Because we spend a good bit of time on Christmas Eve NOT near a computer, having the ability to track the Big Guy on my phone was pretty neat.  I could show the kids in church where he was.  The only hiccup was when Santa showed up at my Mom's house to give out presents.  Why couldn't we see him on my phone in Frankfort?
christmas daily holidays