Posted by Jake Parrillo on January 22, 2011
*Looking for the recipe?  You can skip the story & find it here:  Tom Thayer's Italian Beef Recipe

With the Bears in the NFC Championship game, Chicago is all orange & blue all the time.  Both papers are draping themselves in the Bears flag, the local newscasts seem to be leading with a Bears angle, and there sure are a lot of Bears jerseys at Menards today. 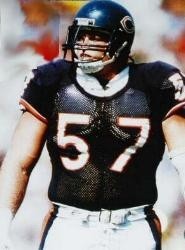 But...there's also something else going on:  party planning.  Based - solely on ONE DATA POINT - it seems like everyone MUST be looking for recipes to make for the various parties they are hosting tomorrow.  That one data point is the seemingly random popularity of a recipe I posted almost a year ago:  Tom Thayer's Italian Beef Recipe.

Over there on the sidebar of my blog, Google Analytics displays the top posts - based on traffic - for the past week.  There are a few usual posts that get a bunch of search traffic and a few "current" posts.  But...this particular one has never appeared before.  My only (completely uneducated) guess?  Party planning!

Don't know who Tom Thayer is?  That's him over there on the right - in all his glory.  He's a former Bears offensive lineman and current radio analyst on their broadcasts on WBBM.

And...after eating his version of an Italian Beef, he knows a thing or two about the kitchen (or...more likely his mother does!).  I made a pot of this stuff last weekend for a few friends and we quickly devoured it.  If you're looking for something to make tomorrow for your Bears party, give this a try.  It is a bit spicy, but it will definitely be a hit.
bears cooking dailly Food football
Location: Chicago, IL, USA