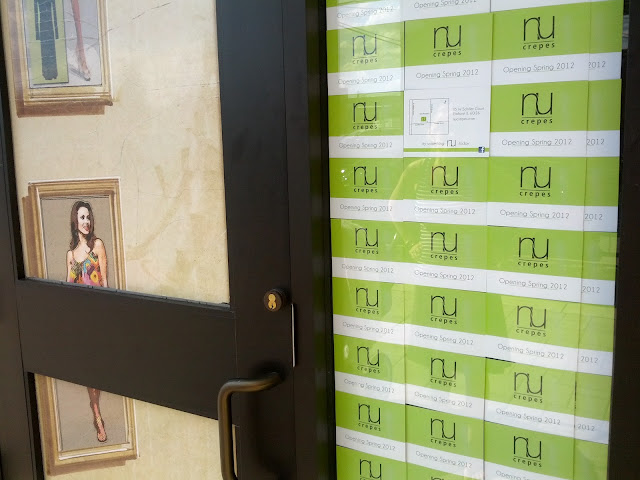 Down what I consider an alley, but the city of Elmhurst calls "Shiller Street" is a postered-up restaurant space that is listed as "Nu Crepes".  The signs on the window say 'Coming Spring 2012', but thus far they're not opened yet.  There's this listing in Chicago Magazine which bills the place as: "A fast-casual, 40-seat spot with breakfast, lunch, dinner, and dessert crêpes, including egg-bacon-cheese, barbecue chicken, and banger toastie, a flavor paying homage to a Dublin favorite."


Based on some of the posts elsewhere on the web, it appears that they secured the construction permits in late Februrary.  The place also has some fans already from when they were selling crepes at the Elmhurst Farmers Market.   This will be the first of what I think are 3 spots in the Shiller Court development.  I hope these guys get this place up off the ground and that they spot develops into a huge success story.  The Addison Street development - which is going to be built right behind this place - should play in nicely with this store and if designed right will make Shiller Court a big asset to the City Center.
daily downtown elmhurst elmhurst city center Elmhurst City Centre real estate