Water Wiggler: For our Birdbath 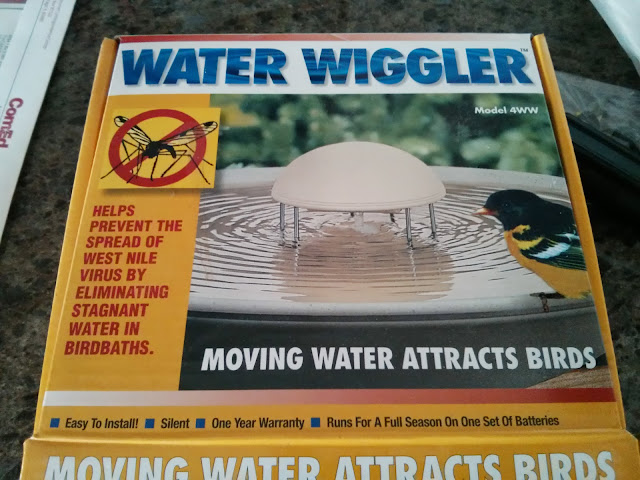 Last year, I received a four-season birdbath that has a cord that plugs into the wall to keep the water from freezing.  It also happens to have a railing clamp - which allowed me to put it right on our back deck outside our back doors.  I've been dutifully re-filling the bowl when it dries out (the recent rains have really helped!), but I don't think I've ever witnessed one single bird come over and take a drink.

But, over the weekend, I found this Water Wiggler still in the box.  I was given it by my mother-in-law a few years back and never installed it.  I put it together, slapped in a couple of D Cell batteries and plopped it into the bowl.  It creates this neat ripple effect on the water which moves the water out in concentric circles.

That has the benefit of helping eliminate a potential mosquito breeding ground (moving water is bad for mosquito babies!) and according to the box, birds are attracted to moving water.

Guess what?  Not 4 hours after putting in the wiggler, I saw the first two birds stop by, perch on the rim and take a drink.  Pretty neat!

I'm thinking that the location isn't perfect.  It is right by our back door so that likely spooks some of the potential customers, but I wanted to put it in a location that we could see easily to enjoy the visits from our feathered friends.  I'm going to leave it on the deck for another month and monitor the usage.  If it stays low, maybe I'll try a different spot and see what happens.
backyard birdbath birds gadgets