The York Building - Coming To The Old Plass Location On York 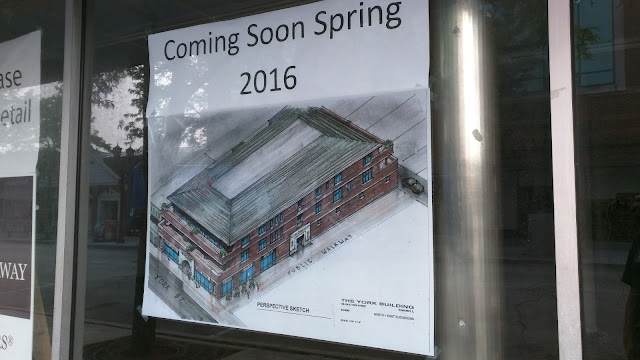 This morning, on my walk to the train, I spotted this rendering that is up on the windows of the old Plass store on York Street.  It shows a three-story mixed-use building and has an entry on the 'public walkway' to the north of the existing Plass building with an entrance for something called "York Condominiums".

I covered the building back in February when they took the asbestos out of the first floor here on the blog.

It looks to have a terraced elevation with the second and third floors receding backwards - which I think will help with the street presence.  I am, a bit bummed that they're going to be ripping down the Plass building - along with the sign.  Take a look at this post that shows the sign and the building.

I know that government's role isn't to dictate to property owners what they can/should do with their property, but as the Elmhurst City Centre continues to evolve, I think we'll wish we had *more* of the old buildings that came from a previous generation.

At the same time, we have to balance the need to profit for business people along with preservation and community impact.  Does this constitute the best/highest use?  I'm not sure.  But, having more retail on York along with more residents in the core of the downtown (with condos), I'm going to say that I land on the 'support' side of the spectrum on this project.