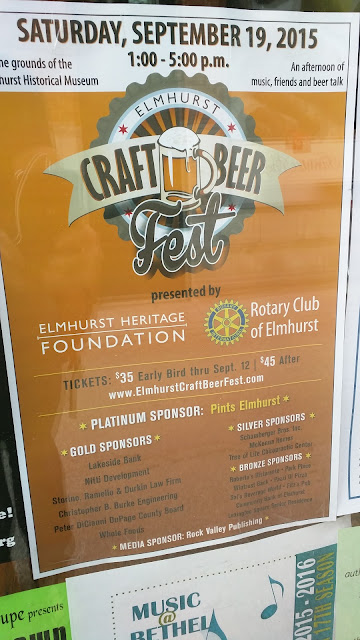 Tomorrow over by the Elmhurst History Museum there's what I *think* is the inaugural Elmhurst Craft Beer Fest being put on by the Elmhurst Heritage Foundation and the Rotary Club of Elmhurst.  $35 tickets for 18 tickets that are good for 3 oz samples.  18 x 3 = 54 ounces of beer.  That's 4.5 12 ounce beers for your $35.  Seems like a fair deal.

I'd call this a nice addition to the event calendar in town.  Hoping it is a success and that it becomes a repeat event.

There's quite a few breweries represented.  No Solemn Oath, though?!?  But lots of big guys and some interesting ones like Nat's favorite Stone and Revolution from Chicago.  Good job by the organizers to get *so* many breweries/beers lined up.

From the Brew Fest's site:

This is the current list logo's of participating breweries. Check back often! We continue to add to the list.