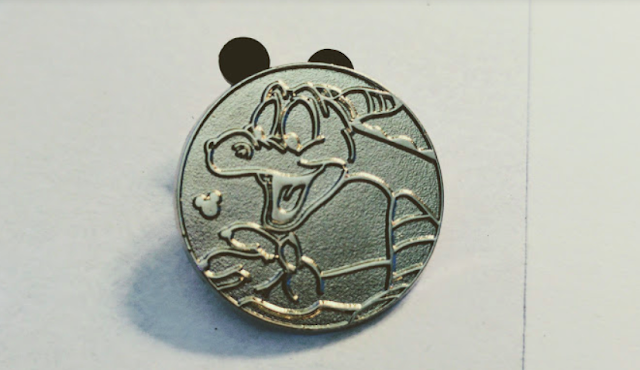 The Babe traded for this one on a trip down to WDW recently.  And it is a chaser.  What's a 'chaser'?  Welp, it is one of these non-colored, metallic versions of pins at Walt Disney World.  From Living A Disney Life:


These metallic doppelgangers of some of our favorite, colorful pins first appeared in 2011. They are “Hidden Mickey” pins (small Mickey head appears on these). All Hidden Mickey pin collections (painted and chaser) are released on Cast Member lanyards. Chaser pins, interestingly, are not released as part of the set they seem to belong to – they’re released (after the original, colorful ones) as part of a larger set of chaser pins belonging to a particular year.

And this one features Figment - who has his own cult following.  We've been on the Figment ride a few times and while I love Eric Idle and the song is pretty catchy, the ride is pretty meh.  I know that's not an original thought, right?  But, as for Figment?  I kinda like him.  He's OG to Epcot and Epcot has a sweet spot in my Disney heart.
disney pins figment pin trading pins the babe walt disney world wdw
Location: 200 Epcot Center Dr, Orlando, FL 32821, USA