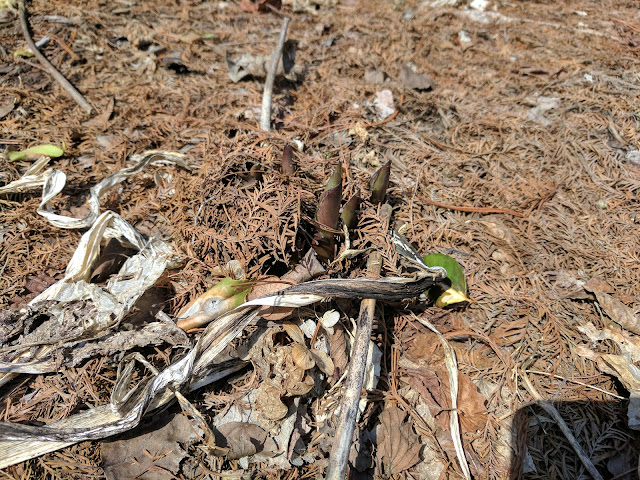 Spring time always brings some anticipation of watching our perennials breaking through the ground and beginning to show themselves.  Starting last year, that was occurring both at Equation Boy/Man's house (where we are living) and Nat's folk's house (where we had placed our orphan'd plants).

I chronicled our orphaned hosta last year starting with their emergence and then followed up with a full glory photo later in the season.

Recently, we were out in Naperville and I went to check out the fosters.  Sure enough:  they're coming back in year two.  Above, you can see the buds of the giant hosta emerging in the middle of the photo.   The smaller hostas as well as the ferns and peony plants are all coming up and I'll post about those soon.

But, now the question becomes:  when do we move them?  This post indicates that there's 2 shots per year: early Spring and later in the Fall.  It looks like we'll miss the Spring window, but should we try in the fall?  Or wait until next Spring?  Depending on how many 'sections' pop up this year, maybe I will try to take one of those smaller sections and transplant it this fall and hedge our bets?  See if we can get both to survive come Spring of 2018?
foster plants garden gardening Hostas landscape landscaping naperville plants shade gardens
Location: Naperville, IL, USA