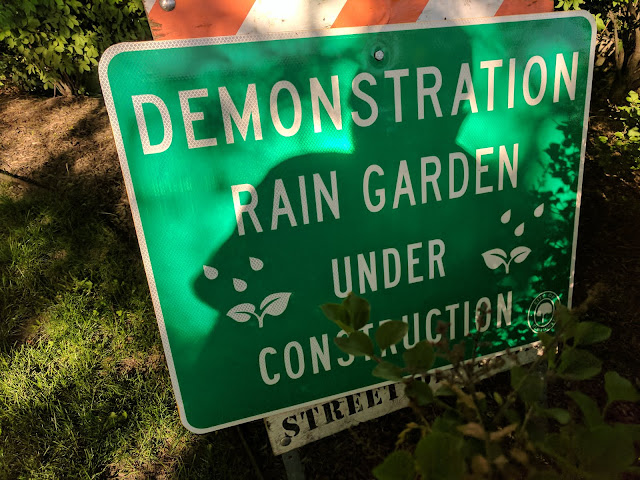 If you get a chance, take a walk by the Elmhurst Police Station on First Street and get a view of a newly installed/created 'demonstration rain garden' that they've recently built out front.  As of the past few days, the construction fence was still up around the project, but it appears that all of the work is complete and now they're just wrapping up the project.  The City of Elmhurst is - kind of - putting their money where their mouth is on this.  I say 'kind of' because they, ummm, didn't use their own money I don't think; they got a grant.

Details on the garden can be found here on the Elmhurst Storm Water Plan site where they describe the project:

The Project Involves the construction and maintenance of a rain garden, sized between 800 and 1,200 square feet, to include an engineered soil mix to promote infiltration, as well as a variety of native shrubs, grasses, and forbs, immediately south of the Police Station. The goal is to reduce the runoff of pollutants, such as suspended solids, metals, and nutrients, which eventually flow into Salt Creek. Two of the downspouts from the Police Station roof will be redirected from the storm sewer into this rain garden. The City was awarded a DuPage County Water Quality Improvement Program grant for a portion of this demonstration rain garden. 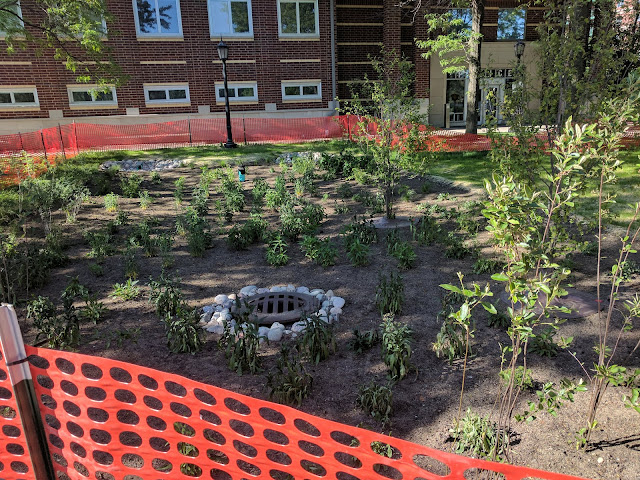 The City of Elmhurst is actively incentivizing homeowners to take on stormwater challenges when they're doing redevelopment (teardowns) or improvements (additions) and have laid out a policy where the City will make a contribution to the improvements in actual dollars.  Policy is detailed in this memo here.

All of this stems from a proactive City Government that is working to solve the flooding problem that has been a significant issue for residents all over town.  And, I have to tell you:  I don't love government in general, but I think that Mayor Steve Morley, Alderman Jim Kennedy (Chairman of Public Works Committee), Alderman Chris Healy (Vice Chair of Public Works Committee), Alderman Dannee Polomsky and the rest of the City Council should be commended for a multi-faceted approach that seems to be solving the problem.  Just look at the list of stormwater management projects either in the design phase or construction phase and the handful that are already completed.  They're doing their part.  And this seems to be in spite of a Park District Board that has been difficult to work with at every step.

While the impact so far has been small (just a handful of 'acre feet') has been completed, the looks of the big project on York Street at Crescent Ave/Cambridge Ave appears to be wrapping up.  They'll boost the acre feet they've added to the stormwater system 10x in the next few weeks.  Incredible!