Posted by Jake Parrillo on May 26, 2010
Yesterday, we held a press conference at TSS-Radio on the northside of the city with Mayor Daley regarding Google's Economic Impact on Illinois (more on that later).  I picked the hosts from a list of Google customers in Chicago and these guys had a friend in common (thanks, Eric!).  They turned out to be great hosts and told a great story for the event.

That's not the best part.  They're a satellite radio parts/supplies company.  A real long-tail business.  The founders of the company are huge Howard Stern fans.  I'm not afraid to admit that I am too.  In fact...I like to think that I don't really have satellite radio.  I have a Howard Stern Machine.

Due to their fandom, these guys bought the "Baba Booey Ball".  For 99% of you guys reading this, you won't understand, but for one or two of you guys, you'll get a chuckle out of this photo. 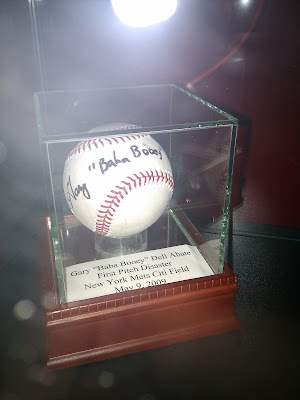 One of the speakers (the guy from the State of Illinois) referenced the ball and said "Baba Booey" during the press conference.  As soon as we have the audio, we'll be calling Steve Langford!
daily google radio