Posted by Jake Parrillo on June 22, 2010
Earlier this year, Nat and I bought Nat's mom the Pioneer Woman Cooks cookbook for Mother's Day.  We sent the book away via the USPS and also sent the PW a note via email telling her that it was coming.   (We also paid for the return shipping ahead of time.)

A few weeks later (kind of disappointing that we didn't get an email response), this arrived back in the mail. 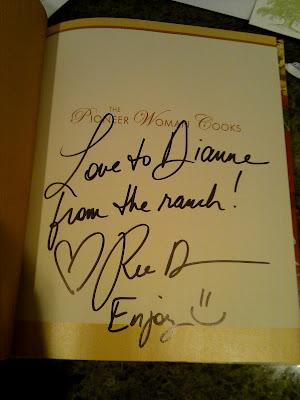 While I am thrilled to get the book back, the whole process made me re-think my expectations of "people on the internets".  I held the PW in pretty high regard, and, at the end she delivered (the signed book), but the process and no email response back were a bit of a bummer.  I bet she gets A LOT of email, but a simple "I'm on it" response would have been perfect.  (and would have allowed us to actually print it out and give it to Nat's mom on Mother's Day instead of giving her an IOW.
In the end, she still makes tasty food.  And...the Crash Hot Potatoes are in regular rotation at our house(s). now among others.
blogging cooking daily