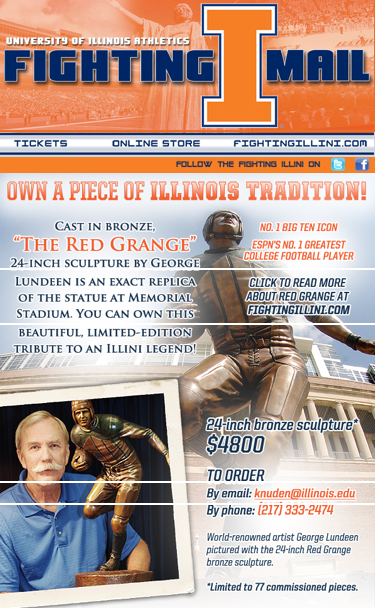 Last week, the University of Illinois Athletic department sent out an email to fans/alums/supporters/donors hawking this 24" Red Grange sculpture that is an exact replica of the spectacular statue that they put up a few years back at Memorial Stadium in Champaign.  The idea is great, but the price is crazy.  $4800 for one.  I understand that they're limiting the production to just 77 pieces (get it?  Red Grange's number was 77), but they should make something more affordable.   A few years back, I bought a bronze(ish) statue of Chief Illiniwek.  I'm not certain what it is made out of, but it wasn't crazy expensive.  Probably a few hundred bucks.  I would like nothing more than to add this Grange statue to my Chief statue.  But,  until they make a ton of them out of something other than bronze, I have a feeling that I won't be able to explain a $4800 charge to our credit card to Nat.

As a side note....have you checked out the Grange statue in person?  It is pretty awesome.  When they do the *rest* of the Memorial Stadium renovation (horseshoe), they'll have to add a Butkus one too?  After all, he's the only OTHER number the Illini have retired.  Speaking of which, one fun story I have from my time as a punter on the Illini team is that when I was on the team, the lockers were organized by number - not position.  Sure, a lot of the guys were grouped together because their numbers were close (think offensive linemen being #60's and #70's), but that wasn't always the case.  But there were 2 lockers that went unused.  #51 (Butkus) and #77 (Grange).  I thought it was a pretty neat tribute to the 2 greatest players in Illini history.
daily fighting illini fighting illini football football illini Red Grange