Posted by Jake Parrillo on June 21, 2011
Early last spring, my sister Vic gave me a few onion sets to plant in the garden.  They were little tiny onions that eventually grow into big onions.  Or so I thought.  I planted them in May or June and by September, the scallion part (the green shoots) were growing nicely, so I presumed that the onion underground was getting big and bulb-y.  Thus, I dug one out.  Only to be really disappointed.  The onion had not grown much at all.  It had about doubled - from the diameter of a dime to the diameter of a golfball, but it wasn't much of an onion.

I had about 6 of them in the ground, so I just left the rest.  Not sure what would happen to them over winter.  Fast forward to this spring and much to my surprise, the onion plants sprung back.  And they got HUGE.  And, they formed these really pretty buds that started (just this week) to expand and break out to show a set of even more tiny buds. 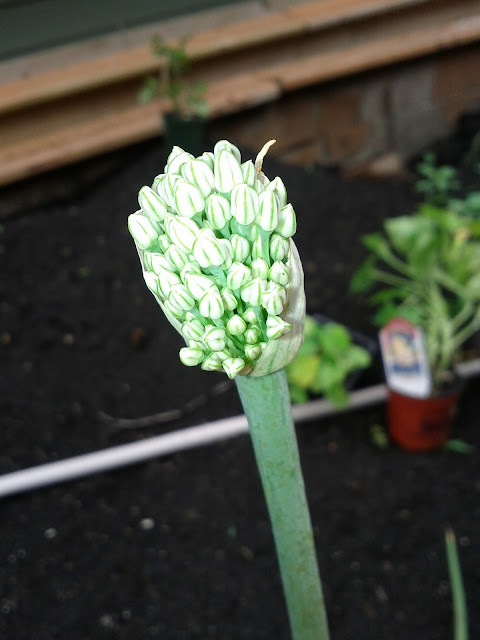 Based on the guidance from the folks at the U of I extension, I may never get my dry bulb onions - that are good for slicing - from sets.  They seem to require transplanting of some sort.  At the end of this season, I'll dig up another onion plant and see what the bulb looks like.  I could always cut down the green onion part and harvest the shoots/stalks.  Or....come September....Maybe I'll have something underground?  Or...maybe I'll just have a pretty plant that will stay in the garden for years to come.
daily garden gardening