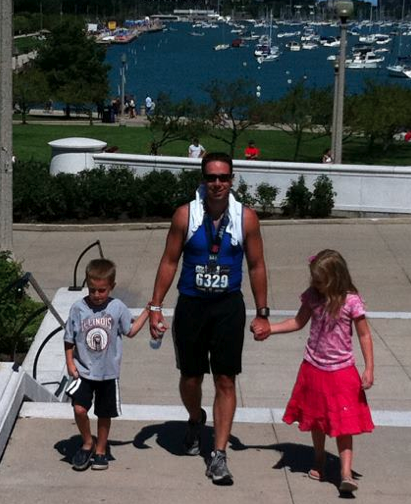 Equation Boy/Man finished the 2011 Chicago Triathlon with a personal record best time today.    Last year he ran the Sprint Distance, but this year he kicked it up with the International Distance which included:
Really very impressive stuff all around.   He said he was struggling on the end of his run, but from the looks of his time, he did just fine.  Killed it in his age group and overall.

I shamelessly cribbed this photo from my sister Vic's FB page, but I thought it was a great shot of him after the race with 2 of 3 of his kids. I couldn't imagine doing those stairs after the race!

He's clearly caught the bug and after spending some time with him this afternoon, sounds like he's already plotting his training for the 2012 race.  He's really committed to getting the most out of his fitness routine and all his hard work has clearly paid off.