Posted by Jake Parrillo on September 06, 2011
Three years ago, Nat and I were married in front of all of our friends and family.  We're extraordinarly blessed and lucky that most of them are still in our lives today.  Here's to 60 more years together, Nat!

I still think about our wedding a lot - and with Nat being a wedding pro (literally), I think the event was a great representation of ourselves and spoke about who we were and who we wanted to be as a couple.  We kept the wedding website (NatalieandJake2008.com) out of search and I think I remember having the guys from 1871 (Thanks Phil and Rick!) meddle with the robots.txt file so that may be why the WayBackMachine doesn't have a copy of the site.  But....we do have some relics from the wedding still around.  Specifically....I have dug up digital copies of the invites just this morning - Thanks to Flickr (where they have the bulk of my digital life from 2002-2006 locked up!  The rehearsal dinner - which was my domain in terms of planning (mostly) was a politically-themed affair.  I wrote about the invites in August of 2008 here, but the invites still stand up and warrant a re-post.  The wedding invites were *really* girly (in the nicest possible way!), but these invites designed by me (with some help from Curtis Scott - a political advertising company) and fit the bill.  The theme was politics - remember....it was fall of 2008 - right it the midst of the McCain/Obama campaign (Nat was a team O member and I was on the *right* side with McCain.

We came up with a slogan ("Together for a better America") - which I think is a riot and even secured a few 'endorsements' - including the Chicago Tribune! Maisy (Margaret Thatcher Moran) is featured prominently in the photos - and even endorsed the marriage (see the fine print!) along with our folks and a fictitious wedding planners union that I made up! 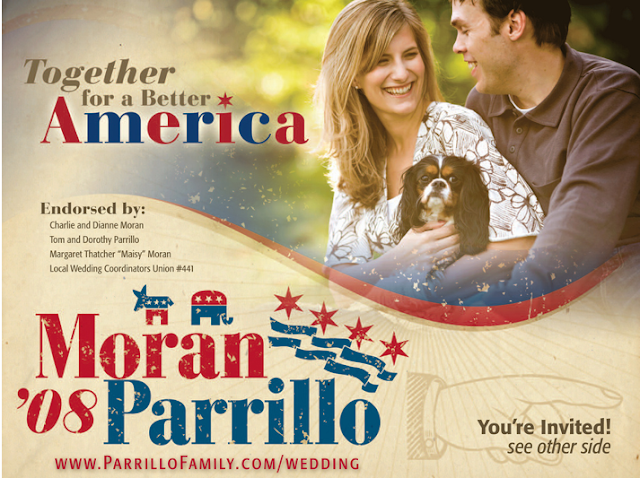 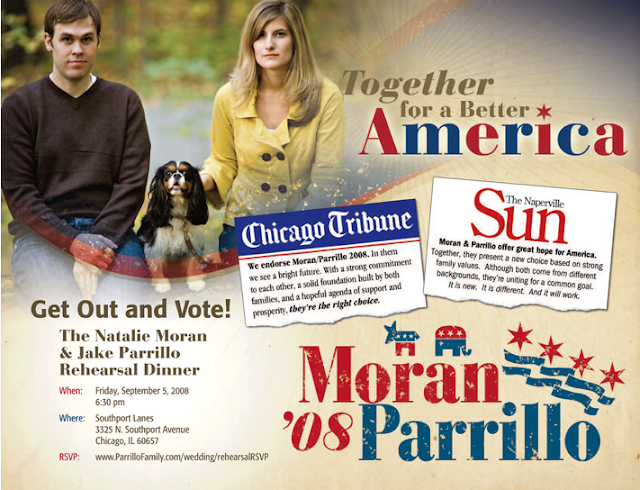