Last night, we took the two girls out for ice cream at BrainFreeze and stumbled upon a series of live musicians that were playing around the City Centre.  Turns out, the Elmhurst City Centre group is hosting an event series called "Block to Block Party" every Wednesday and Saturday night from Memorial Day to Labor Day.

The Party consists of live musicians at four locations around the downtown area.  We saw three of them and they added a nice atmosphere to the area.  It didn't hurt that it was an amazing night out.

The notion of live, acoustic music played two nights a week in town every week is a nice one and...in my mind...is a bit of a differentiator.  I don't know of any Western Suburban Downtown area that does something like this?  Maybe other's do indeed have a musician in place, but the scale at which this is executed (4 musicians two times a week all summer) is pretty great.

Will it get people downtown?  I'm not sure, but it certainly can't hurt.  It appeared that at least *some* of the stores around town were open when we were walking around that I don't think stay open past six pm.  Hopefully, they'll see a nice boost from the foot traffic.  Either way, I like the thinking here from the City Centre group.

If they're open for recommendations, I have one:  what about a digital/online photobooth for these Wednesday nights.  Imagine getting your photo taken and delivered (with some Elmhurst City Centre branding) that you can easily post to the social network of your choice (Instagram, Twitter, Facebook, etc).  Could be a nice way to bring the offline experience of shopping/dining/walking around in the City Centre to online and allow sharers to broadcast to their friends what they're doing.  If not a photobooth, what about a #hashtag? 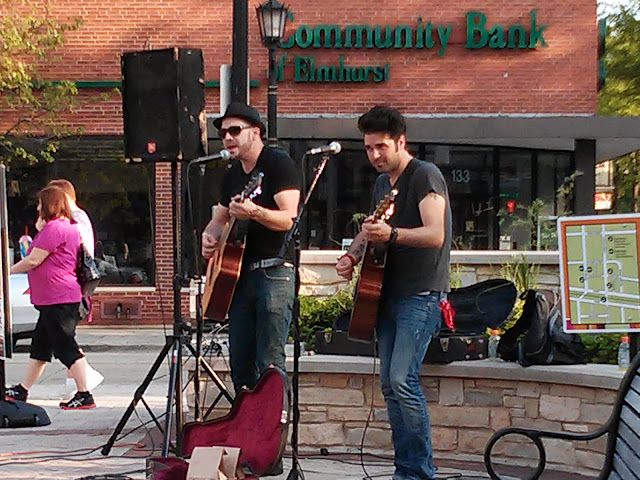