An Update To My Detroit-Style Pizza (A Progress Report) 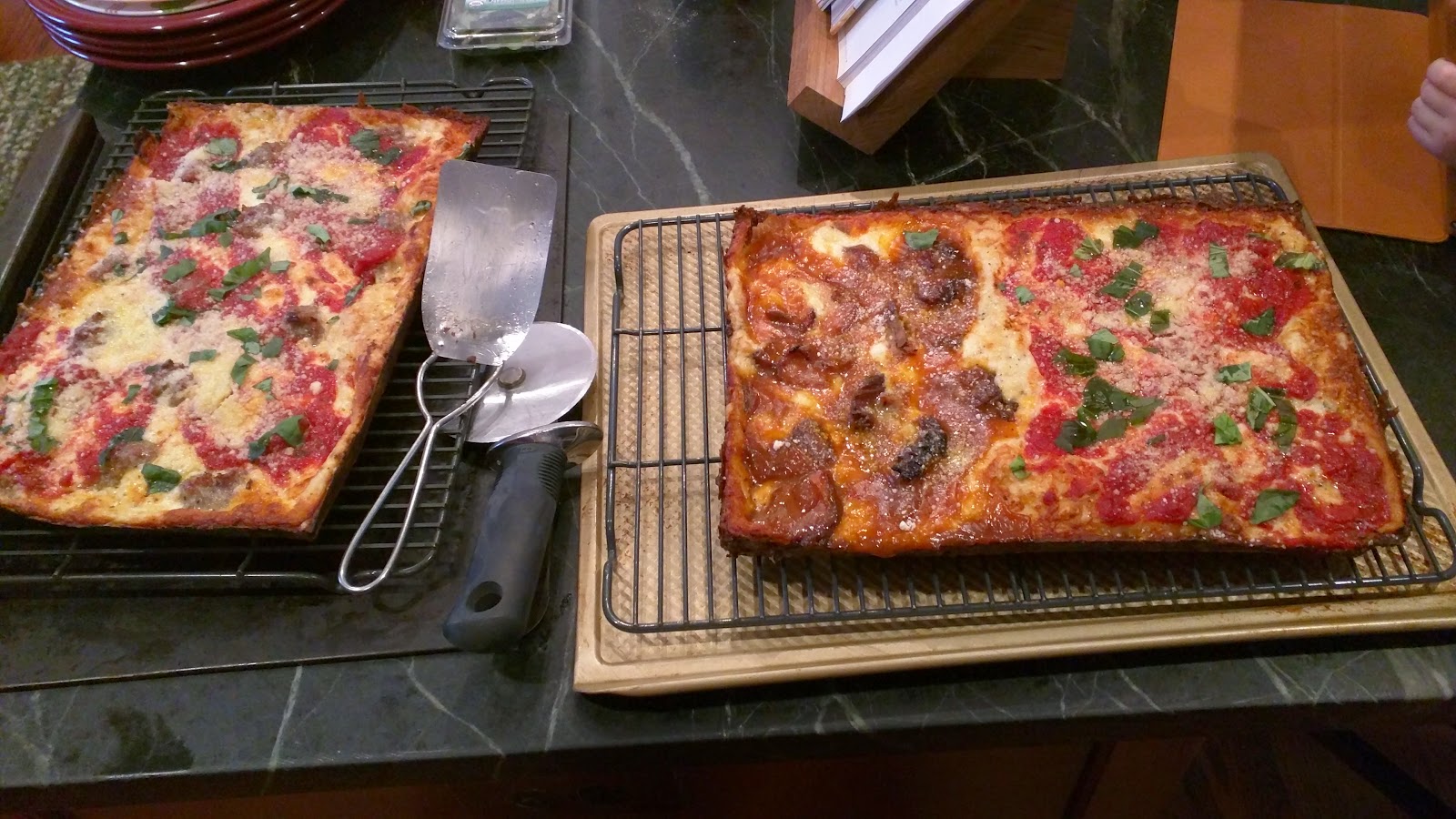 I took this photo a week or so back ago at my in-laws place.  I was able to make a few pizzas for our Sunday night dinner over there.  On the left (in portrait mode) is a sausage and soppressata combo and on the right (in landscape mode) is a half bbq pulled pork (on the left) and cheese/tomato (on the right).

A few notes:  The pie on the right was baked in one of my primary pans.  Meaning...it is well seasoned and has no trouble coming out of the pan.  On the left, that pie was cooked in one of my 'newer' pans.  I've been trying to rotate one of them in (I have 8 total!) on occasion to build up the seasoning on each of them a little bit at a time.  The problem is that I RARELY need to have all 8 going at once and usually only cook two pies at a time.  That means, my primary pans are in tip-top shape, but the other 6 go idle most of the time.  Unfortunately...when that once a year occasion arises and I have to cook more than 2 pies, I always stress about the shape of my 'back-up' pans and worry if I'll be able to extract the cooked skins out of them without trouble.

I'm really pleased with the progress I've made and they're starting to come out more uniform in terms of cooking level and taste.  Been three-ish years, so I supposed the progress should be expected.  But, still...to me, it is good to note.

This 'rotation' process is going to take A LONG time, but I think it is the right thing to do.  The 'second' pie might suffer a bit because it isn't being cooked in one of the most seasoned pans, but that's ok as I'm likely the only one to notice the difference.

As for the pulled pork:  Nat made a shoulder in a dutch oven earlier in the week so I figured it was worth trying as a topping on the pie.  It was great, but lightening won't strike twice, I'm guessing in terms of the availability of the pork.  In terms of taste, I think it was marginally better than chicken, but that's likely because of the liquid gold that it was topped with:  TJ's Carolina Gold sauce.

Both pies are topped with the same 'border' and interior cheese.  I'm not yet ready to disclose the 'border' cheese, but as always, the interior/top cheese is the BEST available:  Chellino Scamorza.
2015 resolution everygoddamdamnday pizza pizza making