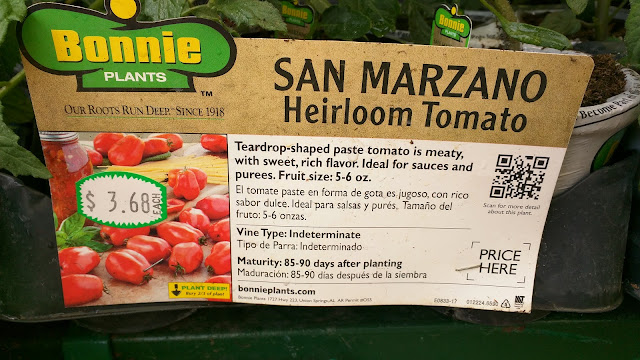 Back in 2011, I went on a plum tomato binge.  I think I grew like six or seven varieties of plum tomatoes including a plant or two of these San Marzanos.

Because of where they sit in the pizza universe, there's a draw to these that is unnatural for me, I think.  I actually don't eat a lot of tomatoes if I can avoid them.  I do, however, eat a lot of 'sauces and pureees'.  On pizzas. On sandwiches.  On noodles of all sorts.

I also haven't canned anything in a few years.  The effort just never yielded a lot of upside for me.

But, after seeing these Bonnie Plants heirloom variety sitting on the shelf of Home Depot over the weekend, I just.simply.couldn't.resist.  Into the cart they went.  Along with some other things that will cause me agita all summer long.  But, that's for another day.
2015 resolution everygoddamdamnday garden gardening pizza tomatoes vegetables