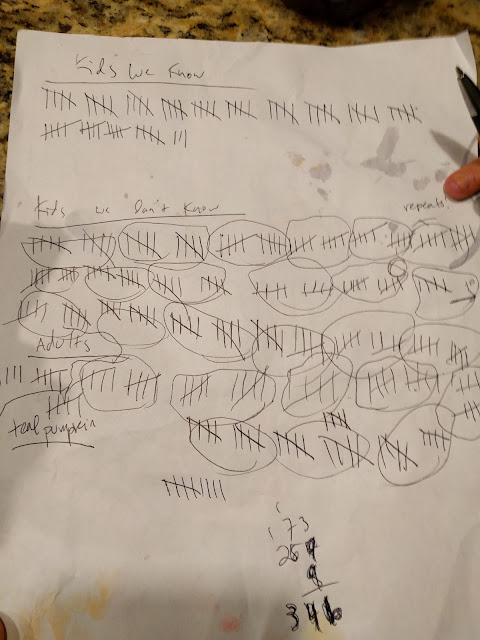 That's up from last year's tally of 308 and sets the new record for Halloween.

A few things to note:

1.  It rained a bit his year.  Wasn't as bad as last year when it rained the entire time we were out trick-or-treating.  But that still likely made it a bit harder to turn-out for trick-or-treating for some.
2.  However...this was a Saturday.  That's the first time trick-or-treating wasn't on a 'school night', so I'm thinking that accounted for the increased turnout.
3.  We were down the block from where we normally have been.  The '09-'14 totals were from the mid-200 block and this year we're at Equation Boy/Man's house down in the lower-200's.  That *has* to factor, but my assumption is that we'd be lower in the mid-200's than we'd be at our old house.  We're further from North Avenue and thus, I'd think we'd have less 'parkers'.
4.  My daughter and wife kept track of portions of this list this year, so I can't - without a doubt - guarantee that these results are perfect.  They might be under-reported. Or...because it was a kid doing some of the counting....over-reported.  I was out trick-or-treating with the kids during a portion of the evening.
5.  The count includes some 'repeats', meaning that a group of kids hit us up twice and were identified by Nat!  We still counted them in the total, but the 'real' number of unique visitors is lower than 346.
6.  This year, we had 9 adults by themselves.  Meaning they either had their own bag and came up with their kids or they just flat out came up by themselves (which happened once this year!).  That 9 is down from 2014 when we had 10 adults.  But up from 6 adults in 2013.  But we had 9 again in 2012 and in 2011, so it seems that 9 is right about where the bar is set for adults going forward.
2015 resolution elmhurst equation boy/man everygoddamdamnday fall halloween holidays tally trick-or-treaters