The Force Is Strong In This One... 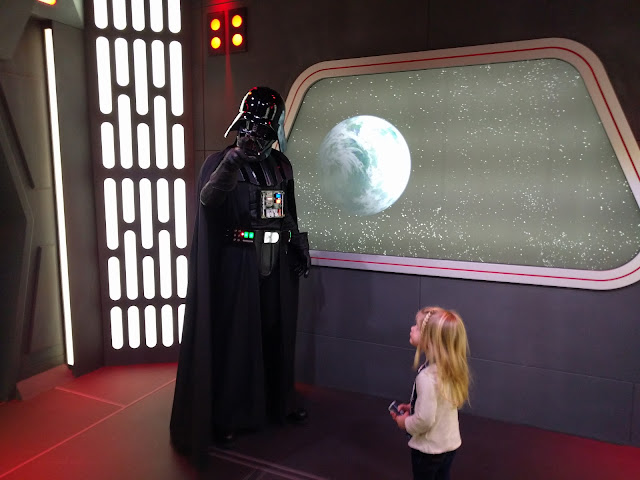 The Bird here was the only one to be brave enough to confront Darth Vader on our visit.  He was VERY tall and VERY imposing.  He startled us when we arrived.  The queue is set up so you don't really see him until he kind of jumps out at you.  I jumped back a bit.  The Babe wouldn't come out from behind Nat's leg.  Totally different reaction from when we all met Chewy.

They have Vader and Chewy (and now I think Kylo Ren??) set up in Tomorrowland at Disneyland in a place called the Star Wars Launch Bay that has various artifacts from the seven movies (helmets, sabers, vehicles, etc).  It is a nice little way to bring Star Wars into the Park at Disneyland while they're busy building the new Star Wars land.  Which...can't get done soon enough.  Pandora (Avatarland) is coming online sometime in 2017 and unlike some folks, that has me really excited.

I'm a big Joe Rohde fan (even follow him on Instagram) and he's been at the helm of Disney's Animal Kingdom from day one and is running point for Imagineering on the new Pandora (Avatarland) that is going into Animal Kingdom.  Am I a huge Avatar fan?  Meh.  Sure....I liked the movie, but I hardly remember it.  But, from the previews of the land at the D23 conference this summer, the new land looks awesome.  So, I'm excited about experiencing this new immersive 'land' and once we know when the new land will open, I'm sure we'll book a trip down to Orlando for a visit.
2016 resolution disney Disneyland Imagineering star wars the bird