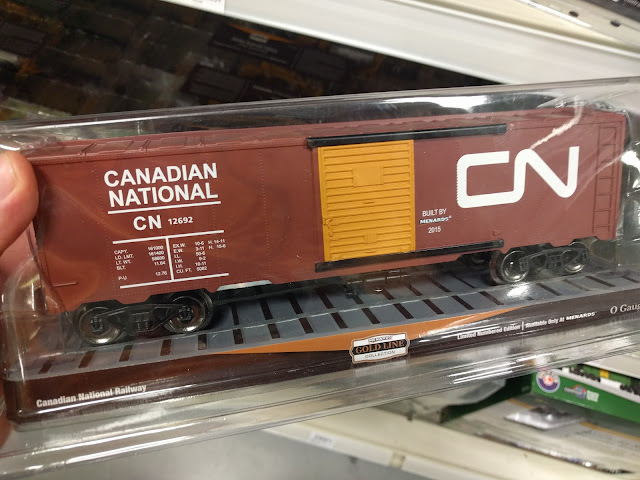 Menards has been doing a really great job of churning out some interesting O Gauge rolling stock over the past few years.  This car above is from the Canadian National and if you look closely has a little mark to the right of the door that says 'Built by Menards 2015'.  My oldest sister has been working in the railroad industry for a long while.  First for the Chicago and Northwestern.  Then the Union Pacific.  And now the Canadian National.   She keeps a few O Gauge cars in her office.  Have to think that this one would fit in well.

And that might be the best use of these Menards cars, in my opinion.  Looks.  The couplers kinda suck.  They roll really nice and once you have them set up and connected, there's very few problems.  But, they're NOT high-quality couplers and NOT Lionel couplers.  They sell these cars pretty cheap.  Like $20 for each one and less if you buy 6 of them or something like that.  Can you imagine having a layout that would allow for your train to pull six of these things?  That can't be the only locomotive you're running if you're doing that, right?  It'd get awfully boring.
2016 resolution christmas train lionel menards model trains o gauge sisters trains