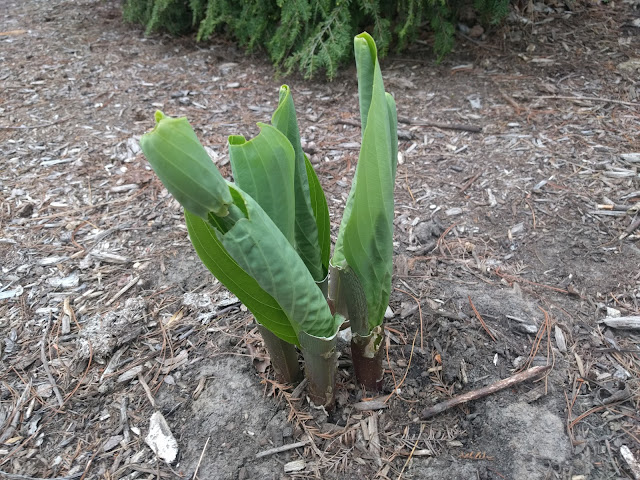 I've written about the hostas at our old house a few times here on the blog in the past and being part of our shade gardens, they're one of my favorite things to tend to.  Perhaps it is because I grew up down in Frankfort on a heavily wooded lot that just about only allowed my Mom to have shade gardens?  Or, that they're mostly the domain of perennials that come back each year and there's something magical about those?  I dunno.  But...one way or the other, I like shade gardens.

We had a really nice, maturing set of shade plants on the north side of our old lot.  We had ferns, astibiles, and plenty of hostas.  All sorts of hostas.  Some, like these, I picked up at Menards.  Some, were left overs from when the wicked lady moved out of the house and she *thought* that she plucked every last perennial out of the gardens only for us to discover the next year that SOME came back including some hostas.  And a special plant that came from my sister Sharon's house in Hinsdale.  She was moving out back in 2009ish and had her yard professionally done and maintained by landscapers and had some really great plants.  Including these HUGE, massive hostas.

As she was packing up, I took out a spade and dug up a plant and took it home.  Put it under a Cleveland Pear Tree in our front yard, watered it the rest of the fall, and hoped for the best.  It came back the next year.  And wasn't huge.  But, did ok.  The next year, it was big enough to divide.  So, I divided it and put the new plant in the backyard.  A few years later, I divided it again.  And it was thriving.

Fast forward to last year when we moved out.  I didn't want to leave behind this special plant.  So, I dug up one of them and put it in a pot to transport to Nat's parent's house in Naperville.  Nat's Mom tends to her garden pretty well, so she picked a spot and planted the hosta.  (There were a few more plants that we brought over there, but I'll post about them separately).  It was right in the middle of the summer.  Like mid-July.  Super hot.  Not the best time to transplant things.  But...we had to do it then.  We were moving out.

I crossed my fingers.  Nat's Mom did, too.  And guess what?  Happy ending here.  Look at that photo above.  That's the hosta this weekend.  It broke through the mulch in Naperville and looks happy!

Since we don't quite know where we're ending up yet (hoping, praying that we *finally* have it solved, but we can't quite say for certain yet), I'm thinking this one will spend another year in Naperville.  Maybe later this fall or early next Spring, when things calm down and there isn't heavy equipment that might crush it, it - along with some others - will get their FINAL move back home.

And once it is re-established?  I'd love nothing more than to break it up and give one BACK to my sister.  I know she's not looking back, but it might be nice to have something in her yard from her old place.
2016 resolution garden gardening Hostas inlaws landscape landscaping perenniels planting shade gardens transplanting