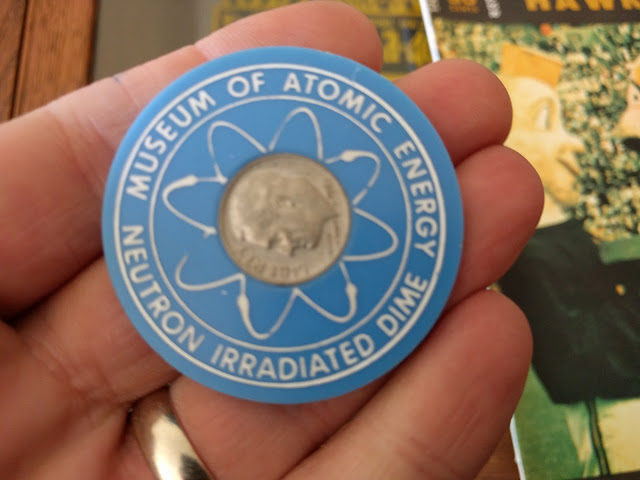 I picked up this "Neutron Irradiated Dime" from the Museum of Atomic Energy at an Estate Sale here in Elmhurst earlier this Spring.  My dad collected some coins over the years - and gave away proof sets for special occasions.  I found this story about these irradiated dimes and there were more than million of them, so they're not terribly rare.

But, that doesn't matter much to me.  I liked the looks of it and it just screams 'atomic age' from the looks of it, doesn't it?  I've stuck it into my stashbox for now and figure that's a fine place to keep it for the next few decades.

Turns out, this is from Oak Ridge, Tennessee.   At least, I *think* it is, even though the name of the museum is different on the coin I have.  More about the place:


The American Museum of Science & Energy is today’s No. 1 Oak Ridge, TN tourist destination. But from 1941 to 1949 Oak Ridge was a town that did not exist. It was one of the top secret facilities for creating the “Manhattan Project” atom bomb used on Hiroshima and Nagasaki. This was the site of a working nuclear reactor for producing fissionable isotopes of uranium.