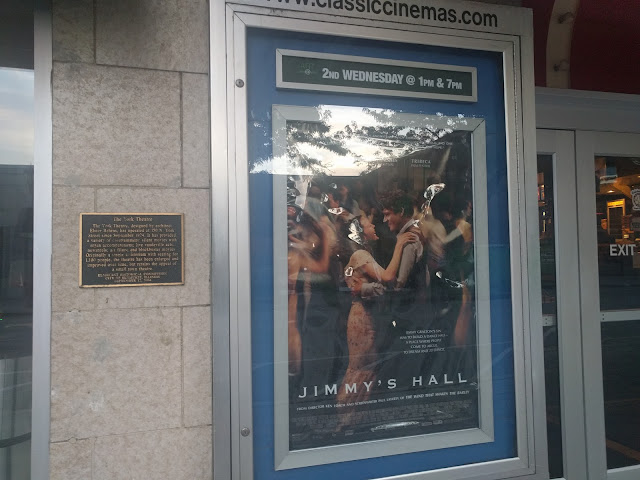 The next film up in the Art @ the York Theatre series in the Elmhurst City Centre is Jimmy's Hall.  You can see the official listing here on the Classic Cinemas' site here.

There's also this Eventbrite listing that allows you to 'register' for the screenings?  Which is weird, but maybe you can buy tickets through Eventbrite, now?

Anyway, about the film:


In 1921, Jimmy Gralton's sin was to build a dance hall on a rural crossroads in Ireland where young people could come to learn, to argue, to dream, but above all to dance and have fun. Jimmy's Hall celebrates the spirit of these free thinkers. The film is set in 1932 and follows events when Jimmy returned from a decade in New York and re-opened the hall. The film is freely inspired by Jimmy's life and turbulent times. (109 minutes)

The screenings are on September 14th at 1 pm and 7 pm. And...don't forget to get there early for the preshow entertainment at 12:30 PM on their Barton Theatre organ with Dave Rhodes, Tivoli Theatre house organist. That's a wonderful part of seeing movies at the York.

It doesn't appear that I covered the July showing in the Art @ York series, but here's the one from June, May, April, and March of this year.  The full archive of the series is here at the Art @ York tag page.
2016 resolution art @ York classic cinemas downtown elmhurst Elmhurst City Centre movies
Location: Elmhurst, IL, USA