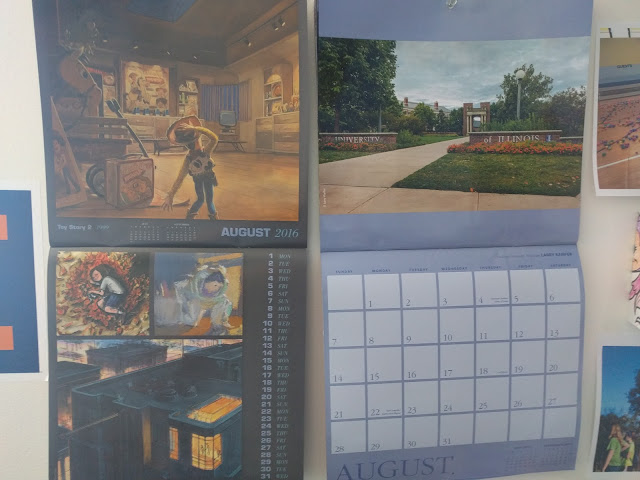 This month's wall calendar update comes on the 2nd of the month, which is a very fast turn around time if history serves as any indication.  On the left in the Pixar calendar, we have Toy Story 2 - yep!  - #2.  And on the right is the University of Illinois Hallene Gateway.  This thing was put up in 1998 during my time on campus and has a nice little archive page that the University has put up here.  Someone, had the foresight to preserve this when they were taking down one of the original buildings and after sixty years, someone 'discovered' it and brought it back to life as a bit of a gateway to the campus on the Urbana side.  From the UIUC archive page:


Dedicated October 8, 1998, on the 63rd annual meeting of University of Illinois Foundation, the Hallene Gateway Plaza was funded through the generosity of Alan M. and Phyllis Welsh Hallene, graduates of the class of 1951. As its centerpiece, the Plaza features the original sandstone portal of the New Main University Hall (the 4th building built on the UIUC campus, in 1871, where the Union presently stands). When New Main was razed in 1938, its portal was saved and placed behind the Architecture building. Though the years the portal was slowly forgotten and eventually was moved out to Allerton Park for storage. In 1994 it was rediscovered near maintenance sheds among "brush, raspberry brushes and small trees" and a backhoe had to be called in to help unearth it.

We're now at -15 days.  And looking ahead to the next few months, that 15 day span seems impossible to lose.   The only wild card is December.  I don't seem to have tracked December of 2015, so we'll have to decide what *exactly* to do if things are neck-and-neck when December comes to be flipped.
2016 resolution calendars disney office pixar university of illinois wall calendars