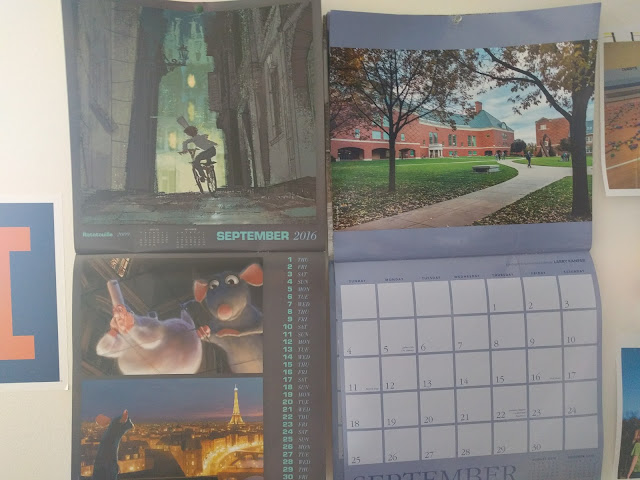 Although this post is going up on September 12th, I turned these calendars over on the 7th.  I took the photo above then.  And here's proof - if you go to this Google Photos link all the data is there with the photo.  Not that anyone but me really cares, right?

On the left is Ratatouille from 2009 on the Pixar calendar and on the right is the Grainger Engineering Library on the UIUC calendar.  And a kinda fall-ish day.  Not quite fall.  Not quite summer, either.  I think the photo works for September.

Last year, I turned the calendars on September 18th.  This year, I posted on the 12th, but turned them on the 7th.  Hmmm...let's be fair here and call it on the day I posted.  I don't want this lead to be too insurmountable.  So that's a net of -6 days.  Add it to the pile below.

As for the movie Ratatouille, I really liked it, but have only watched it one or two times.  I think we own it?  We should break it out again.  It made more than $600M at the box office according to BoxOfficeMojo.  And there's a ride at Disney Paris (if you have a moment, check out this ride-thru video.  Neat stuff!), but with the character creep happening in Epcot, I have my fingers crossed that we'll be seeing something mouse-related (and not Mickey!) coming to the France pavilion in the near future.