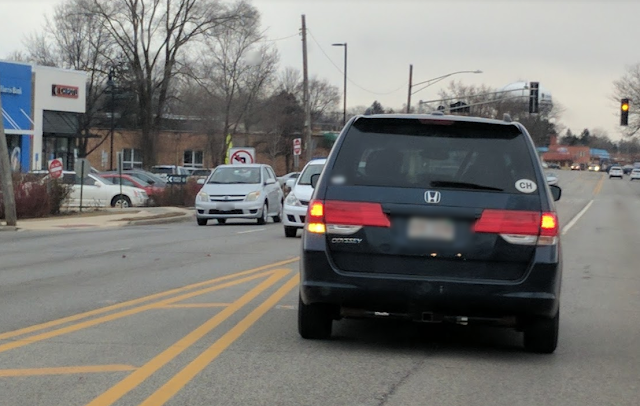 Out on Ogden Road in Downers a few weeks back, I spotted this Honda Odysessy, which at first glance appears to be your standard, run-of-the-mill grocery wagon that we all drive out in the suburbs.  But, if you look closely, you'll see a "CH" oval sticker in the corner of the rear window.

I saw it and then as safely as I could, whipped out my phone and tried to take this photo.

Why?  Because that "CH" oval sticker is one that I saw a bunch when we were visiting my sister and Equation Boy/Man in Switzerland.  CH means Swiss, which came as a surprise to me.  But now, when I see it, I know!

I gleefully emailed off this photo to Equation Boy/Man and I'm hoping that they'll come home with one of these stickers and stick it on the back of their own van when they're living back in Elmhurst this summer.   They'll have fellow ex-pats that they know (and don't know!) who they'll be able to smugly wave to as they drive past around town.   Kinda like a little, exclusive club.
cars equation boy/man minivan stickers switzerland