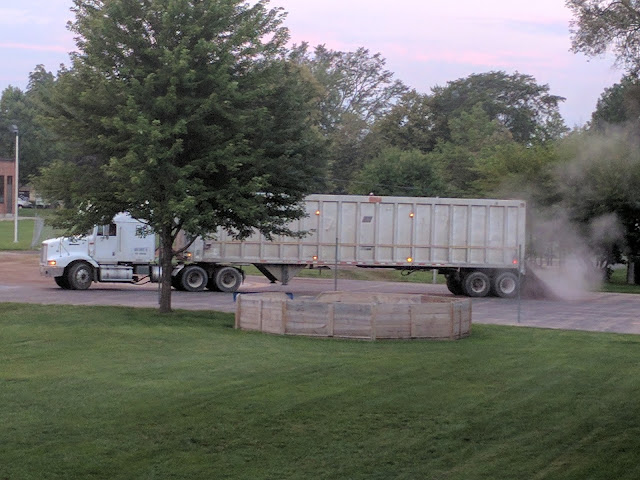 In June and July I posted about the new playground going into Whittier Elementary School in the Randall Park neighborhood in Downers Grove.  It is right up the street from our new place.  You'll recall, that this was built with private donations brought together by the Whittier PTA - which is really great!  And...you might remember that I pointed out the WRONG playground.

I've been watching the progress the past few weeks and noticed that the playground closest to Grand Avenue (the one I first posted about) is complete and has the pea gravel and mulch laid down to complement the new, refreshed concrete curb that they installed.   Earlier this week, I was out in the early morning hours and noticed that a large truck had arrived at the *other* new playground as was busy dumping down new, steaming hot mulch to get installed.  From the looks of the situation, this appears to be the final step required before they can re-open the new playground to families and neighbors.  Once it opens up, I'm sure we'll get the kids over there to put all of the equipment through it's paces.
downers grove Downers Grove Schools playground Whittier School
Location: 536 Hill St, Downers Grove, IL 60515, USA