Posted by Jake Parrillo on May 26, 2011
News comes today that the City of Elmhurst is pushing ahead with ANOTHER tax increase that will cost those of us in town even more money for the exact same service.   This time it is a 8% increase in the cost of both water AND sewer.  I understand the realities of the revenue/cost situation at City Hall and that the City has said that they can't cut any more (I'm skeptical of that) and they'll (of course) point the finger at others - in this case the DuPage Water Commission - as the real bad guy.  They'll say, "Oh...don't blame us!  The DuPage Water Commission is MAKING us do this!"

What happened to "The Buck Stops Here"?  Apparently that's not the approach of Elmhurst Mayor Pete DiCianni.  Instead, he's going to jam through another tax increase and not loose any sleep over it.

I think it is time for the City to STOP being disingenuous with the pricing of water and sewer fees - and this could have been the right time for the move.  But instead of doing something innovative and creative - and ultimately tough - Mayor Pete and his staff took the easy way out and just decided to increase taxes and pass the tough decisions on to future administrations.

In calling the City's pricing of water and sewer services disingenuous, I mean that they're NOT actually charging the real costs.  Why do I say that?  Because they factor your sewer charges based on only one factor:  how much water you use.  So, they're blindly figuring that every drop of your water is going right back into the City sewers.  Guess what?  All the water isn't going there.  But they're still charging us for it.  Think about the water that you put into your grass or garden or landscaping.  Guess where that water ends up?  Not in the City of Elmhurst wastewater treatment plant like the water that comes out of your sink.  It goes into the ground and stays there.  But the city is charging you like it is going back to the treatment plant.

So, what's the solution?  It is called a "Deduct Meter" - which is a second meter that measures the amount of water that is NOT discharging into the sanitary system.  Other towns use them, but not Elmhurst. 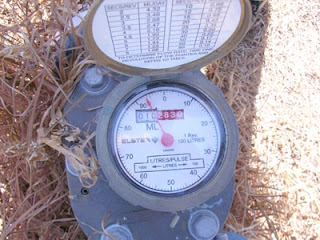 Why not?  Well...because they can get away with charging us all for more in sewer costs than we're actually using and NOT charge the real costs of the service to residents.   Allowing the installation of Deduct Meters - which are done by private contractors and are paid for by the residents, thus not costing the city anything - is a tough decision because it forces the government to come to grips with reality.  They'd have to actually figure out what things cost.  Gasp!  Imagine that.  Government having to operate like a real business?  Actually being accountable for pricing and costs?