Posted by Jake Parrillo on September 11, 2015
Earlier this week, Google announced the expansion of Google Express to include delivery in the suburbs of Chicago via this blog post.  Being a 'root-for-the-home-team-kinda-guy', I *had* to give it a shot, right?

Google Express allows for overnight delivery of goods from a network of retailers including Walgreens, Costco, Toys R Us and others.  Much like Amazon Prime, you can pay an annual subscription charge and receive free shipping.

On this maiden order, I decided to skip the subscription and just pay the $4 it cost to get the stuff to my house.  To make things easy, I picked just one store:  Walgreens.  And after filling my cart with a few things, I got the hang of it.  I quickly realized that I had to hit $15 in stuff to get to the delivery threshold.

So...I went around and plucked a few things from the various departments and nosed ahead of $15.  This was on Wednesday.  I also looked at the offerings from a few other stores.  Costco, in particular was of interest.  The first thing I looked up were these rice roller things that Nat and the girls love.  They weren't listed in the Costco section of Google Express.  So...not *everything* that Costco has is available via the service.  They do, however have those tasty PB Pretzels from Costco.

Anyway....after ordering on Wednesday, I got an email yesterday saying my order had been delivered.  When I got home from the office, on the counter was this box: 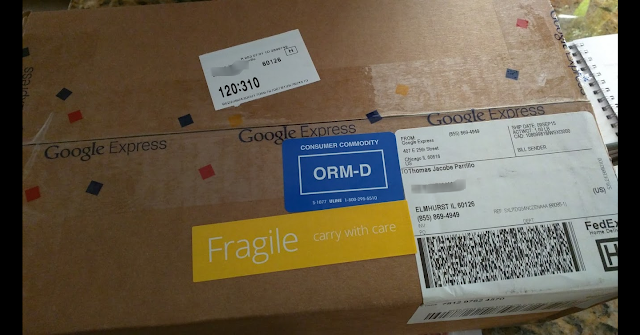 I asked Nat who delivered it and she wasn't sure, but thought that it might have been the mailman.  The box had some cute Google Express tape on it and a nice 'Fragile, Carry with Care' Sticker.

Fragile?  Well...I guess?  Here's a peak at what was inside the box: 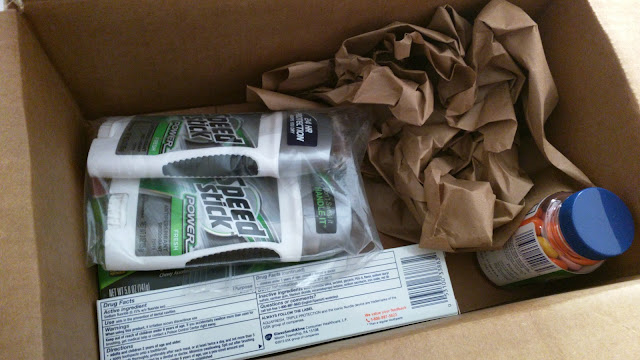 A couple of deoderants, some toothpaste and some Alka-Seltzer chewables.  Not what I'd call fragile, but I'm not complaining.

The service was easy to use and worked pretty well.  In parts of the Bay Area, Google Express is *same day* delivery and that would be a game-changer.  But for me?  This was just fine.  Was it better than Amazon Prime - which is where Nat orders hundreds of items from every year?  Not a lot, to be honest.  But, like I said earlier...I'm a Google-guy, so I'm always going to give them some credit for doing things like this.  Will I jump at the $10/month or $95/year subscription charge?  Maybe?  Just not quite yet.
2015 resolution delivery everygoddamdamnday google google express walgreens