Picture Yourself In Elmhurst 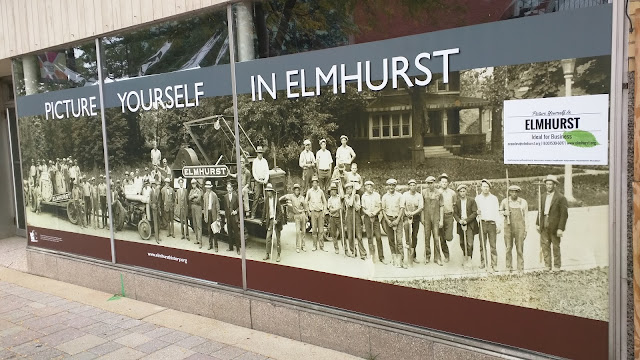 Last week, I wrote about how there's a new rendering of a new construction building on the old Plass Appliance store in the Elmhurst City Centre that portends a new four-story terraced structure with retail and street-level and condos on the upper floors.

But that isn't the only thing that has been plastered on the windows of the old Plass store.  This new "Picture Yourself In Elmhurst" three-panel photo went up and is pretty cute.  It is a bunch of laborers who are installing street lights for the first time in town.  It evokes the same feeling of the lunch on top of skyscraper iconic photo for me.

Here's a closer look at the white box on the right side that shows the reason for the billboard: 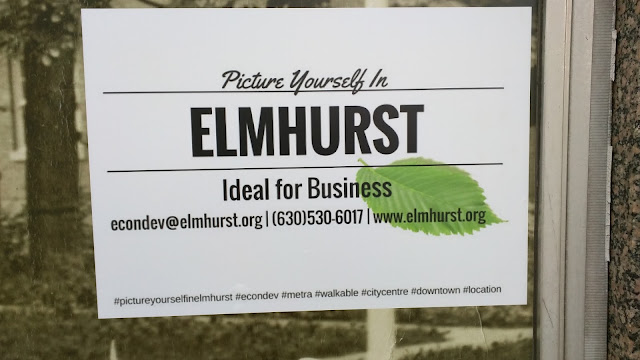 Some of the #hashtags are interesting at the bottom.  #walkable #downtown #citycentre.

Based on the email addresses, it plainly looks like the city's Economic Development group had the idea, but if look closely, it appears to be a nice little bit of inter-governmental-department work between the City and the Elmhurst History Museum.

At the bottom of the billboard is both the Elmhurst History Museum logo and their url:  www.elmhursthistory.org.  You might not know that the Museum is operated by the City of Elmhurst.  I didn't until I just looked at their site right now.


The Elmhurst Historical Museum is an award-winning regional history museum founded in 1957 and operated by the City of Elmhurst. The Elmhurst Historical Museum is located in a historically significant landmarked structure known as the Glos Mansion, which is the former home of Elmhurst's first village president, Henry L. Glos, and his wife, Lucy. The Museum opened in January 1957 on the third floor of the Glos Mansion, which at the time also housed Elmhurst's City Hall. The Museum moved to the Wilder Mansion at Wilder Park from 1965-1975, and then returned to its current location in the Glos Mansion in 1975.

Elmhurst has a rich history that we can all be proud of and a City Centre that everyone is rooting for.  There are *some* of the components of an amazing downtown, but there are some drawbacks in terms or attracting some national retailers (like proximity to Oak Brook Mall), so I'm really appreciative of seeing the City try to bring those elements together.  Use the past to promote the future.

I'm wondering if there are Alderman behind this push?  Ahem...Any Aldermen/women reading this?  Want to give me the skinny on how this came together?