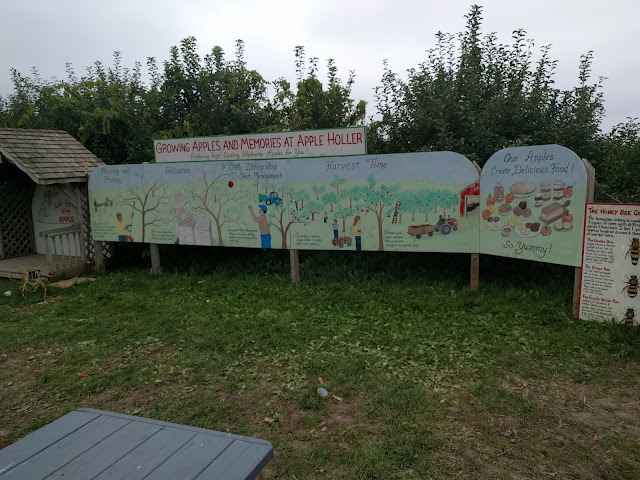 No, I'm not talking about New York City.  I'm talking about "Big Apple".  As in..."big pharma" or "big tobacco" or even the recently-coined "Big Uni" by the guys at Uni-Watch.

We've been to a bunch of these apple orchards and pumpkin patches.  Apple Holler is a combination of those two experiences and it is - based on how crowded it was when we went - quite popular.

Well, let's start with the parking.  It costs you $5 to park your car.

We went up there with some friends, so it was great to see them and spend time together.  Add that to the fact that it is just 30 or 35 minutes from a homebase up at Twin Lakes, it was an easy trip.

Apple Holler also has a farm park that includes a bunch of activities.  That costs just $4/head including kids to get into the park.  Once inside, it appears that you can participate in as many of the activities as you'd like.  This seems to be a pretty common move amongst some of these pumpkin farms/apple orchards.  There's either an 'entrance fee' or there's a menu/ala carte approach to going on the rides/doing things.  At Apple Holler, there are animals to feed, slides to ride down, a corn maze to wander through and even pig races!  Yeah...pig races.  I have to admit, that was pretty fun and unique to see.  See that photo above of the Bird with a pink flag?

And I really don't mind the entrance fee to go into the Farm Park.  Seems like a fine way to go.  It was the $20/person just to go out in the orchard that irked me.

We've been all over the place for pumpkins and apples.  From Jollay's and Crane's in Michigan to Sonny Acres on North Avenue to Bengston's down in Homer Glen.  That's where I went as a kid and what started as a fairly small-town operation as, too, become "Big Pumpkin".

For the past two years, we've gone down to a place in Minooka named Heap's Pumpkin farm that is just a simple, small, quaint pumpkin farm.  We really like it.  There isn't any pretense there, it isn't very crowded and the prices are super cheap.

Apple Holler is a fine place with lots to do and plenty of people joining you on your fall adventures.  If you're into "Big Apple" or "Big Pumpkin", then this place is for you.
2016 resolution apple picking apples fall pumpkins
Location: Sturtevant, WI, USA