Meeting Elena of Avalor At Epcot 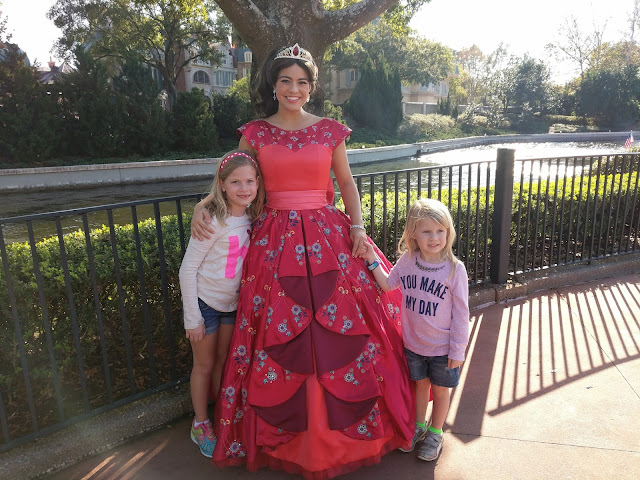 Disney has added a few new 'princesses' (although...I'm not sure who, exactly *is* a princess these days because my Mother-in-law just informed me that Elsa from Frozen isn't a Princess.  She's a Queen, so maybe that's why?) recently including this one above named Elena of Avalor who lives in the world of Sophia the First.  The girls love Sophia, so it was a great treat to meet this one at the backdoor of Epcot Center down at Walt Disney World.  She was hanging out right past the bridge between the France and United Kingdom Pavilions and had basically no line.

And this princess?  She.was.really.great!  Had it all down.

Nat and I both think that because she was in such a low-profile location with very little traffic (she had NO LINE!), that maybe this was a Princess-in-Training?  If she was, she'll graduate VERY FAST because she handled the girls quite well.

Not sure how long she's destined to be around, but if you can catch her, it's worth it - especially if you're doing autograph books because she's a rare find.
characters disney princesses wdw
Location: Disney World Trolley, Bay Lake, FL 32836, USA