If you find yourself down by the Seven Seas Lagoon on New Year's Eve, go down to the beach at the Polynesian and plant yourself.  On December 31st, they do a show early at 7 pm, then another show at Midnight.  If you're staying Club Level at the Polynesian, they set up a little seating area with wooden chairs that give you a really great view.

These photos don't do the show justice, because they launch what they call 'perimeter fireworks'  so the view isn't just straight ahead, but feels like the entire horizon between the Grand Floridian and the Bay Lake Tower at the Contemporary.  And during the Midnight show, they also launch fireworks from this middle island in the middle of Seven Seas Lagoon.  Yeah...that one that the ferry boat goes by every time?  That one.

The kids didn't make it until Midnight, but Nat and I did.  Here's a look at what we saw from our balcony in the Hawaii building.  We snapped a few photos, but there was no substitute for the real thing.  None of the photos do the show justice.  If you look closely, you can see Cinderella's Castle right over the bungalows. 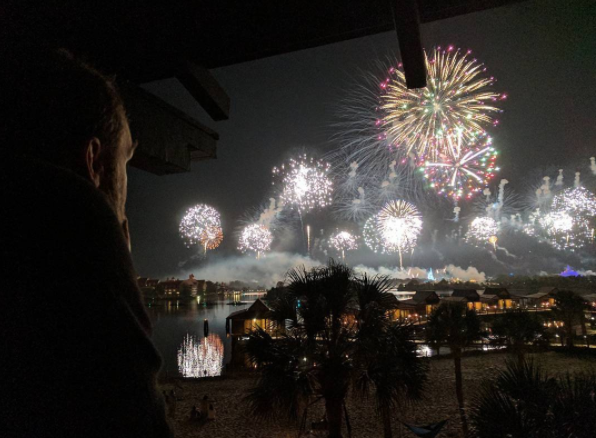 You can see this show from down on the beach, too, but if you know someone with a Theme Park View room in the Hawaii building....get yourself in there.
christmas @ Disney disney disneyworld fireworks new year NYE polynesian walt disney world
Location: Boat Launch - Disney's Polynesian Village Resort, Polynesian Boat Dock, Orlando, FL 32836, USA