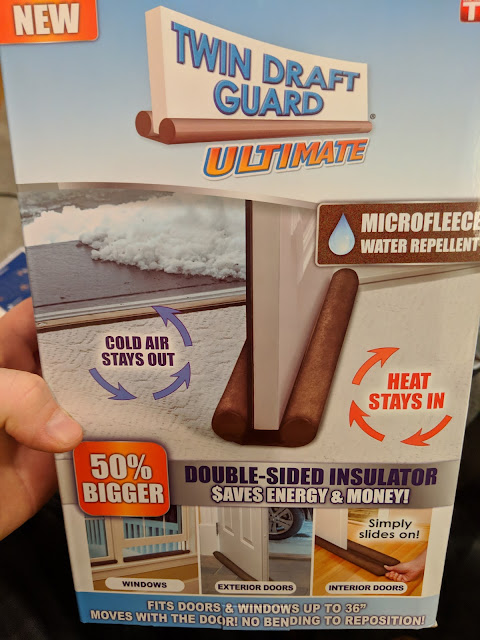 As I do every January (at least lately), I've been documenting the good/bad/cool/useful things that were gifted me via a series of "Christmas Haul" posts.  These are in the spirit of "Haul Videos" that are still all the rage on YouTube.  Unfortunately, I'm neither a YouTube Star nor do I get paid to promote things.  So, these are genuinely all things that people gave me.

But, this one, technically, isn't.  Meaning...no one gave me this. Rather, it came as part of a family grab-bag thing.  You know the type of grab-bag.  You all put in wrapped gifts.  Pick numbers.  Go around and 'steal' things you like.  There's a certain number of 'steals' that any one item can receive before it is out of play.  We do this a few different times and it is both fun and a cost-effective way to gift a large family.

So...this is part of my 'haul' but it was something that was pulled from the pile in a grab bag.  A draft guard that you can slide under your door to keep drafts out.  You've seen them, I'm sure.

So, the grab-bag that this was from had a unique governor:  meaning, it was governed both my price (less than $15) and location (had to be bought at Menards).   Yeahhhhh...buddy!  Menards.  I was in my wheelhouse, right?

I took the kids to buy their stuff for the grab-bag and even entered myself.  The Babe entered the grab-bag with a Lava Lamp and some Twizzlers.  The Bird did some sort of snow cone machine and a some candy.  And the KotBT?  He put in an army truck and Silly String.  And was SOOOOO happy when he was able to pick his own gift out of the pile!

This is what I ended up with:  the draft guard.  You've probably seen them on tv commercials.  I can see it being totally useful for people with drafty houses and older doors.  But us?  We have a tight house.  So, after it was selected, I wasn't going to be heartbroken if someone stole it.  Alas....And nobody stole it from me!  Surprised, right?

So, what to do with it?  Nat thought it would be a pretty nice addition to the soundproofing of my home office.  And after installing it, I think she's right!  My office is pretty-well sound proofed, but the gap under my door certainly existed.  Now?  Not so much.  Here's the photographic proof: 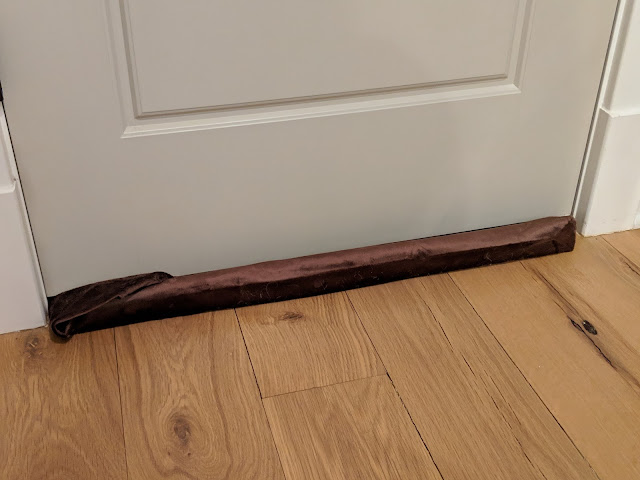 The other 2018 Christmas Haul posts (so far):
I'll post a few of the cooler tool-related gifts in the next week or so.
christmas haul home office