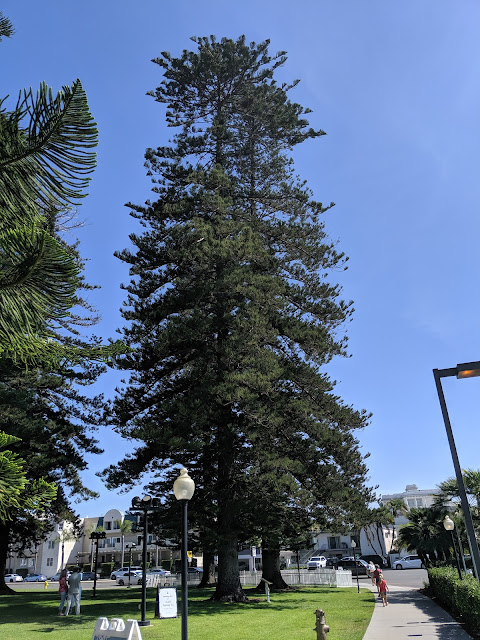 Yesterday, I posted a long post that covered the incredible Dragon Tree, the Marilyn Monroe movie 'Some Like It Hot' and the upcoming renovations at the Hotel Del Coronado.  Go read that post.  Great.  Now you're back?  Today, I'm posting about another tree at The Del - this tall tree you see above.  It is a really large Norfolk Island Pine tree.  And it sits to the right (as you face the front door of The Del) along a sidewalk that takes you out to Orange Avenue.

As you walk by the tree, you'll notice this marker below: 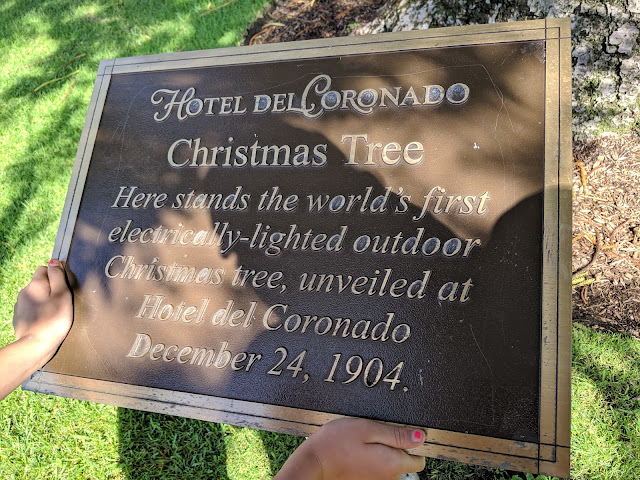 I stopped and read the marker and was all like:

I don't know why, but this feels like a *wow* moment to me.  The idea of people taking the time to hang lights on trees outdoors for Christmas is so accepted today that it is crazy to consider that there is a moment and place where it first occurred.

From The Del's site:


In 1904, The Del – already considered a technological marvel – made history when it unveiled the world’s first electrically lit, outdoor, living Christmas tree. Holiday lights were strung from the hotel to a nearby Norfolk Island Pine. Although indoor trees were popular in America by this time, electric Christmas lights were a rarity (candles were still commonplace).

How did this happen?  A commonplace idea of illuminating a tree at the holidays that now circles the globe was started by two or three or four people.  From SD Pananormal's site comes this blurb:


The tradition that spread around the world was started at the Hotel Del Coronado in 1904. The suggestion of Mrs. Martha Ingersoll Robinson, mother of Mrs. Joshua Baily of San Diego, led to this first-in-the-nation electrically-lighted outdoor Christmas tree. Carl H. Messner of Pacific Beach did the wiring.

That's two or three of the people involved (if you count the total being three OR four...)

1. Mrs. Martha Ingersoll Robinson. Who suggested the idea.
2.  Ms. Joshua Baily.  Who may or may not be involved.  She might just be the daughter who lived in San Diego?
3.  Carl H. Messner.  Who did the wiring.

The San Diego History Center has a photo and the full backstory on their Facebook page and it they point to Edward H. Johnson - the executive at Edison Electric Light Co as the visionary.