The Dragon Tree And The Renovations - Hotel Del Coronado 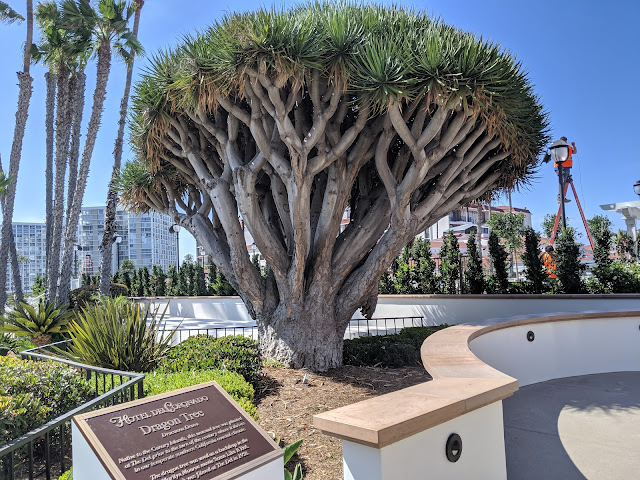 More than 130 years old, this Dragon Tree at the Hotel Del Coronado is a stunner.   Even the hotel itself says that the tree "is almost as iconic as their signature red roofs".  And it is right outside the front door of the hotel.  Well, it is a little bit offset, but if you are walking up the walk from the beachside area towards the front door, you walk right past it.

Check out the marker below: 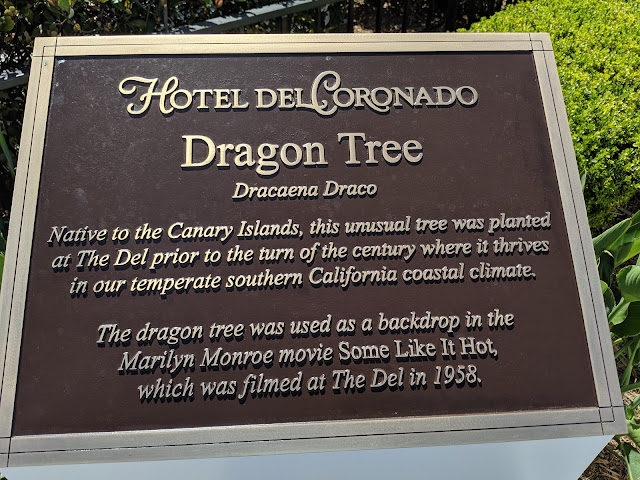 Native to the Canary Islands, this unusual tree was planted at The Del prior to the turn of the century where it thrives in our temperate southern California coastal climate.
The dragon tree was used as a backdrop in the Marilyn Monroe movie 'Some Like It Hot', which was filmed at The Del in 1958.

I haven't seen the movie, but I guess now it should be on our list, right?  The film has a 97% Fresh ranking on Rotten Tomatoes, but it is NOT at all about what I figured it was going to be about.  The plot:


Two Struggling musicians witness the St. Valentine's Day Massacre and are now on the run from the Mob.  Jerry and Joe cross-dress into an all female band.  In addition to hiding, each has his own problems;  One falls for another band member but can't tell her his gender, and the other has a rich suitor who will not take "No," for an answer.

Sounds fun, right? If you have Amazon Prime, it looks like it is available there for free.  I actually didn't know that Marilyn Monroe did comedy - nor did I know that she was a *good* actor.  Turns out, she won the Golden Globe for "Best Actress - Musical or Comedy" for her role in 'Some Like It Hot'.

For some reason, I never considered her work and if I'm thinking back, I don't know if I've ever seen any of her work.

Here's a clip of the star of the movie arriving at what they called - in the film - the Seminole Ritz Hotel.

The entrance to the hotel has changed over the years and the front porch that the gentlemen are rocking in their chairs on is not there any longer, so you can't quite experience what you see in the film today.

The porch that those guys were rocking on was, ummm, grand.  Like, really grand.

Pretty great, right?  Bowler hats.  Rocking chairs and a grand expanse of porch.   It doesn't look like this at all today.  In fact, while I adore The Del, the entire 'arrival experience' - which seems to be so important with hotels these days - is really lacking.

However, when we were there recently, we saw construction fences all over the place.  With a little bit of digging on the Web, I've discovered that they're undertaking a massive renovation and have begun work towards realizing the vision of a Master Plan that was released and approved by the City for the property 10 years go.  Courtesy of the Coronado Times comes this image.


The project includes a bunch of improvements (landscaping enhancements, a street signal at the entrance) and additions (144 new guest rooms, underground parking), but there's a couple of bits that seem the most exciting to me - and are relevant to this post.

First, they're changing the entrance and creating a new "Main Grand Entry Drive".  Here it is in a close-up cropped image below: 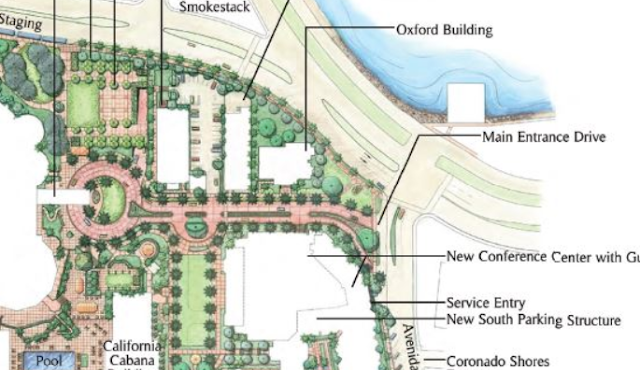 That looks A LOT like what you see in the YouTube clip above, right?  A long drive in on a Palm Tree-lined drive to a circular driveway.  They're bringing that back in a way.  That's great.

And second...there's this nugget in the Coronado Times story:  they're also bringing back *some* of that porch.  From the last bullet point in the first section of their story:
The details are sparse, but in this other story on the Coronado Eagle & Journal, they quote Kathie Breedlove - who they bill being from Blackstone (who owns the place!) about the porch:


Breedlove spoke to the historic component of the Hotel. “An element of the Master Plan is bringing back the front porch experience. There will be a lovely front porch with rockers and lemonade will be served. The Hotel wants to bring back that element of its glory. With the new Main Entry, there will be a sense of arrival. It will be grand, and you will be seeing the Victorian Building and the turret. And the green space will be nice. There will be better views to the beach and that will open the property up for a better event spacing experience.”

Here's what the front entrance looks like today.  Courtesy of Del Coronado Realty below.  Low-slung portico roof to drive under. No grand stairs.  No porch. 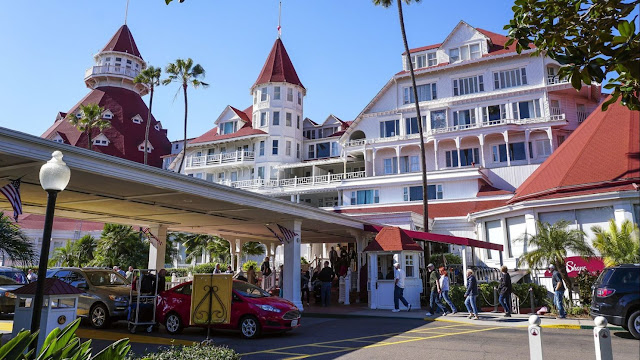 And...Here's a rendering of what it will look like post-construction. Courtesy of Luxury Travel Advisor:

The porch is back in a small way.  But, it certainly *is* there.  And they've brought back the outside staircase.  And moved the portico down and over a bit so it no longer obscures the front entrance.

The new entrance drive and porch/entrance to the hotel will take two years to complete and indications are that they'll get started on them shortly.  Means...that we'll have to look to book a Fall 2021 or Early 2022 trip back to visit The Del to experience the renewed grandeur.
historic hotels Hotel Del Coronado hotels Marilyn Monroe San Diego Some Like It Hot The Del
Location: 1500 Orange Ave, Coronado, CA 92118, USA