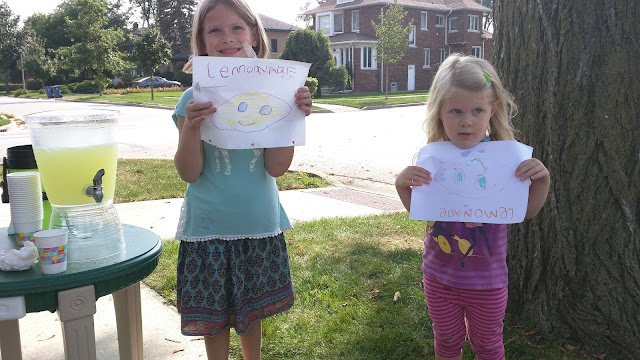 I've been hearing - virtually - ALL summer from The Babe that she desperately, desperately wants to run a Lemonade Stand.  Over the weekend, we finally caved and helped her fulfill her vision.  We only had a few stipulations:

1.  She had to give the lemonade away for free but ask for donations to a charity of her choice.
2.  When we were out of lemonade, that was it.  No whining about wanting more.

Well...I'm happy to report that The Babe picked "Give Kids The World" as her charity of choice and we set up on the corner of 3rd and Indiana where there was a bit more traffic than out front of our house.  We listen to a lot of Disney podcasts in the car and the guys on The Dis UnPlugged talk a lot about "Give Kids the World" and after asking Nat and me about it, that's the one she picked.  We wrote up a little sign on the money jug that said 'Donations for Give Kids The World Accepted'.

For those of you who don't know, Give Kids The World Village is a nonprofit resort in Kissimmee, Florida for children with life-threatening illnesses and their families. The resort's focus is providing accommodations and access to donated theme park tickets.  It was founded by a Holocaust survivor!

They partner with airlines and restaurants and work to get tickets to Disney World for these kids and allow the families to come down to Orlando at no cost to the families to spend time together, grow some smiles and spread a little bit of happiness to the kids.  It really *is* an awesome organization.

You guys know how Disney-crazy we are in our house, so getting the kids to understand that there's a way for them to help out other kids - especially sick kids - to get to go see Mickey is pretty great.

As for the stand, the girls picked up almost $25 in just one hour!  I think our neighbors, once they learned that the lemonade was free and that they were raising the money for a charity, were extra generous with their money!  We thank them!

We're going to send the money off to GKTW this week and talk to The Babe about what it all means and how we can do more in the future.  Hopefully, it was a learning experience for her and her sister.  I know it was for me!  I won't drive by another lemonade stand without stopping.  These kids have their hearts and hopes wide open, hoping you'll stop.  I know I won't drive by another one if I see them out there shaking their money makers on the sidewalk!
2015 resolution babe everygoddamdamnday kids lemonade stand the babe the bird