A week ago, I posted some photos and talked about the new (to me) process of laying in some 'alfalfa cube soup' in my active compost bin as I turned it over and mixed the browns and greens.  That layering of the material that I've collected since last Fall in the one, active bin, came after I had turned over the top of the active bin and removed all the (mostly) black gold from the bottom a week prior.  We're still in the heat of Summer - with air temperatures in the 80's and 90's around here, so it is prime compost decomposition time and 'active' time in our bin.

I have measured the temperature of my bins before - earlier this Summer, I was seeing temperatures of the pile above the air temperature, but only in the 'steady' category.  Somewhere between 80 degrees and 90 degrees.  I posted a photo of my long-stem compost thermometer here back in July showing right around 90 degrees.

Where are we after the alfalfa soup and turning the pile and re-stacking it in the active bin?  I stuck my thermometer back into the pile about 24 hours after filling it back up.  And, we're now in the 'active' zone - above 100 degrees Fahrenheit.  See below for the pile tipping over into that darker green 'active' area. 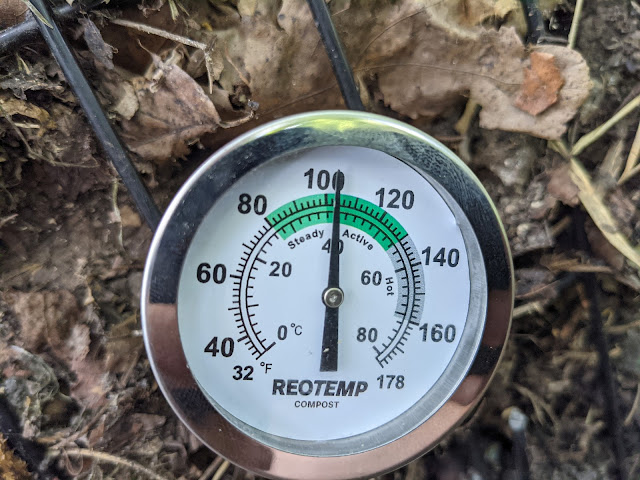 From what I've read, I want to get my active, working (cooking) bin even higher in temperature - something closer to the 120 degrees.  Lee Reich talks about how a 'well-fed pile' should get up to 120 degrees - so I think I might need to add even more alfalfa soup to my mix via drilled or bored holes.  But, that might be for another day.  For now, I'm happy to see my bin in the 'active' zone - doing what it should be doing:  eating and decomposing.  I'll get around to adding some grass clippings when I start bagging the leaves this Fall.
compost compost bins composting garden diary temperature turning compost
Location: Downers Grove, IL, USA