Over the weekend, I posted a couple of photos that showed the latest turn in our two-bin and one tumbler compost setup in our backyard.  Since last Summer, I had one bin (the one on the right as you face it) in 'cooking' mode.  That one has some pvc pipes installed for passive aeration and was (mostly) the right mix of greens and browns.  The second bin (on the left) has been my storage, inactive bin.  I almost everything in there that I had collected since last Fall.  That means, once the bin on the right was full of the final grass and leaves combo from early Fall, I started to put in everything on the left.

In the post from a few days ago, I showed how I had emptied out the active bin and took the (mostly) finished compost and moved it to my tumbler for a final few months of cooking.  My plan is use that compost come Spring time and will use the rest of the Summer and Fall to get it finished.  I also took the rest of the (not quite finished) material from the active bin (the stuff on top) and piled it up in the storage bin on the left.  That's where I left it - and mentioned that I was going to try to use a new (to me) natural accelerator (alfalfa cubes) and add a little bit more passive aeration to the active bin.

That brings us up to today's post.  In the photos below, you'll see the the final state of the bins (full, once again on the right and empty on the left ready to start collecting Fall leaves) and how I got there.

First, let's talk about alfalfa cubes.  I learned this tip from Erin the Impatient Gardener on her YouTube channel where she talks about the 'only thing she buys for her compost bin':  alfalfa cubes.  See the video embedded below:

Now...it turns out that the most common place to buy these big 40 or 50 pound bags of alfalfa cubes is from a feed store.  Nat's Mom keeps horses, so of all the people I know, I figured she'd be at a feed store at some point.  I asked her that if she comes across a bag of cubes to pick them up for me.  Earlier this Summer, she dropped off this big green bag: 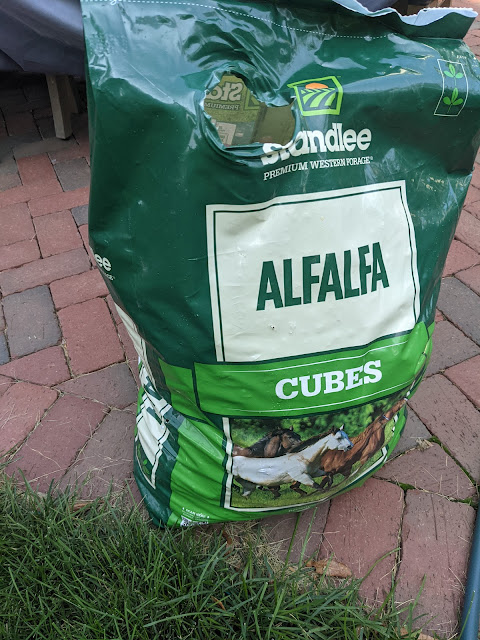 What do they look like?  See below for the dried, clumped-together cubes.  They have a smell.  It isn't BAD, but it isn't GOOD, either.  Something in-between. 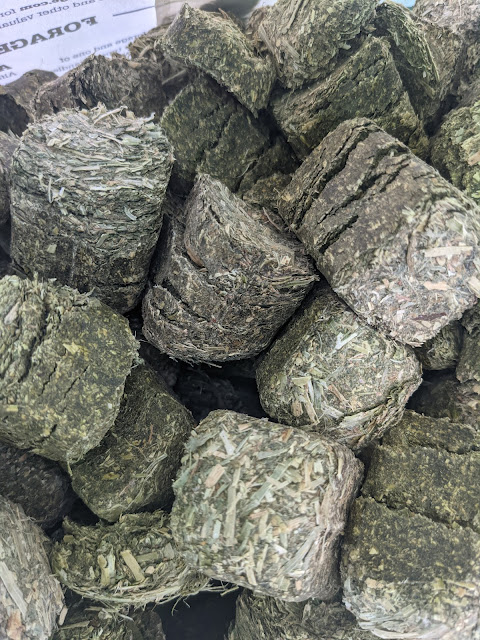 I went about taking Erin's advice and putting about three dozen cubes into a five-gallon bucket and filling it up. I have a lot of leaves (browns) that make my bin to be pretty carbon-rich.  That means that it isn't the right mix of things.  The upside of that is that while it is moving pretty slow, I'm not getting the algae-stuff she's talking about that tends to happen when you go the other way with your mix.

After adding in a layer of the material from the storage bin (lots of leaves), I took the bucket (which was now a slurry of sorts) and dumped it in and spread out the wet alfalfa into a sort-of layer.  Then, piled on even more of the material from the storage bin.  I found big pockets of leaves from last Fall (especially the Oak leaves) that weren't broken down very much.  I was deliberate in making that layer of leaves thin. Then, ANOTHER five-gallon bucket of alfalfa cubes that I soaked.

I ended up adding six five-gallon buckets of soaked alfalfa cubes - in layers that alternated between the mix of materials in the storage bin and a thin layer of alfalfa.  Erin, in her video (embeded above and linked here) calls it 'alfalfa soup', is what you see in the photo below. 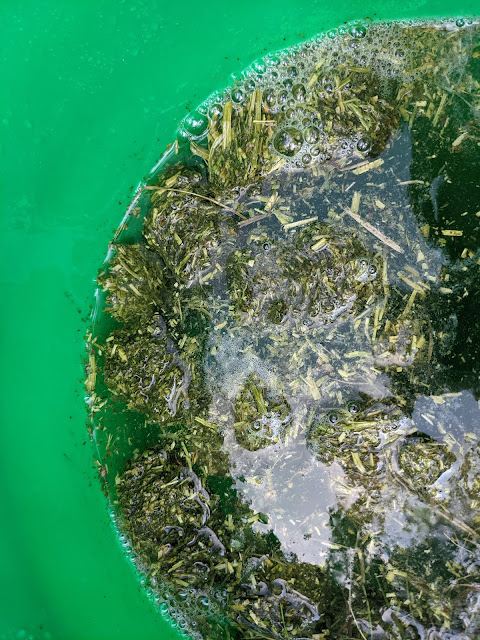 There are two big notes:   First,  she mentions in her video is that she adds her alfalfa cubes in the Spring to accelerate her bins during the key 'cooking season' when we have warm weather.
Second, she recommends thinking about soaking the cubes for a long time.  Even overnight.  I didn't do that.  I did like 15 minutes in the bucket and then stirred to try to break up the cubes.
She subscribes to the 'lazy compost' method - which I'm pretty good with in terms of approach.  For a more intense education, she recommends Lee Reich's compost blog.
In the past, I've used this Jobe's compost starter a couple of times that I'm not certain has done anything, but I suppose this is something to mention - as I didn't use it this year based on Erin's video.
Finally, in the photo below, you can see the current state of the two bins.  On the left, you will see an empty bin.  That's the 'storage bin' and is ready to start collecting Fall leaves.  On the right, is our newly-filled active, cooking bin.  This has all of the finished material emptied out (put in the tumbler) and is now a layered mix of materials from the storage bin and the alfalfa soup.  One note: I added two smaller (diameter) passive aeration pipes higher up in the bin.  You can also see those below. 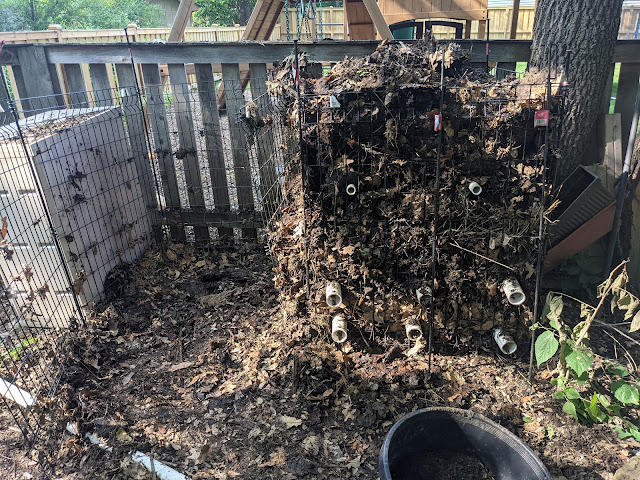 In my 2021 to-do list, I talked about compost in #13 - where I mentioned adding a true 'third bin'.  And using some additional pvc pipes for aeration.  I talked about adding three more to the cooking bin, but I went with just two.  That's because I had this pipe already on hand from our backyard pool. It is smaller in diameter, but I'm thinking that's ok because they're higher up in the bin.  Also, this diameter fits thru the bin panels, so it didn't require me to cut the bins like I had to do near the bottom.    See below for how I made these smaller pipes to be 'perforated', thanks to a drill bit. 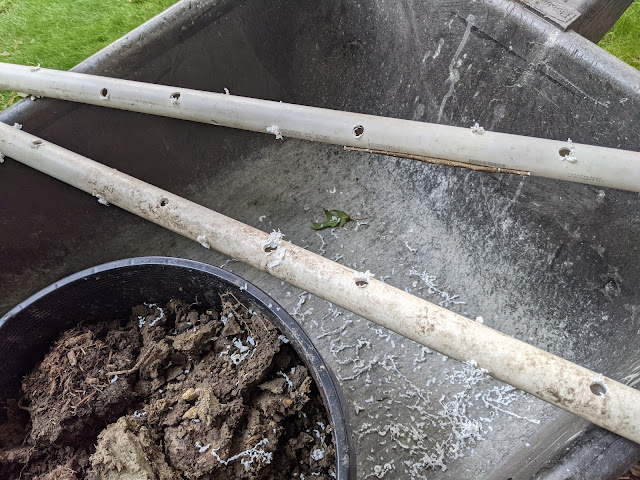 Does this check ALL of the boxes on my 2021 to-do list?  Not really.  But, it does in some ways.  I'll say this one is done (for now), but will put it back on the 2022 list to aerate both bins in 2022.  I have a few other pipes laying around from my pool project of 2020 that I can cut up and drill for both bins.  I think this will be important for the storage bin once I start putting batches of PURE leaves in it - like I did last Fall.  I found a huge pocket in the middle that was bone dry and full of not-touched-by-decomposition oak tree leaves.  Perhaps if I aerate the middle a bit, those will be broken up and, umm, begin to break down.
2021 to-do list 2022 to-do list aeration alfalfa cubes backyard compost compost bins compost gardening compost starter composting garden diary garden tips Impatient Gardener turning compost
Location: Downers Grove, IL, USA